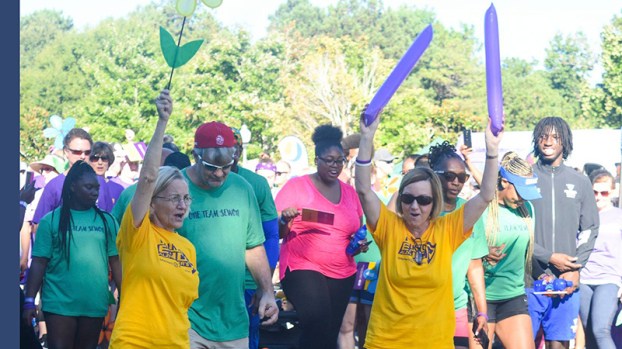 The hope is that one day there will be a cure for Alzheimer’s disease, which currently affects an estimated 5.7 million Americans.

Around 250 people came together Saturday at Vernon Woods Retirement Community for that specific purpose as the annual Walk to End Alzheimer’s took place. As of Saturday morning, around half of the $58,000 goal had been raised.

“The day of the walk is when we collect most of our funds and we still collect for several months afterward,” said Susan Burdick, director of Vernon Woods. “We anticipate making our goal.”

Ally Barnett, who works for the Alzheimer’s Association and served as the staff coordinator for the walk, said that all of the money raised goes to help people dealing with this disease.

“The fact that we’ve raised $29,000 is great because all of that money is going to go back into our local communities. It’s going to help in the care and support of people, caregivers are going to be able to go to classes and receive all kinds of support from the Alzheimer’s Association,” Barnett said. “Everything we do is free, so that’s why we raise this money so that we can provide these services and caregivers for free.”

Before the walk, a ceremony was held, and all participants raised colorful flowers into the air, each detailing a different reason for taking part.

“If you haven’t seen someone go through it, I don’t think your mind is capable of understanding how brutal it is,” Harper said. “It doesn’t just take away the memories and knowing who you are. That’s the first thing people think, but they forget everything. They forget how to function. Their brain takes away their ability of how to live.”

The Sledge family takes part every year, and Harper wore a pin showing a picture her grandmother, Nancy Sledge, on her hat Saturday.

“It’s heart breaking. It’s gut-wrenching,” Harper said. “It’s one of the worst things you can see someone go through, I think. I don’t want to discredit any other disease but it’s horrible.”

At the end, a white flower was raised — which one day is meant to represent the first survivor of Alzheimer’s. That’s the ultimate goal of Saturday’s walk, and the similar walks that occur across the country each year.

“We are going to get there. It creates awareness. Social media has been very powerful in getting word out,” Burdick said.

“We are seeing more and more legislation passed to support Alzheimer’s, and it takes a village to get that done. This is a starting point.”

Donations are still being accepted and can be made by going to Georgiawalk.org and clicking on LaGrange.

What is the best way to honor someone who impacted local children? That is the question the LaGrange City Council... read more