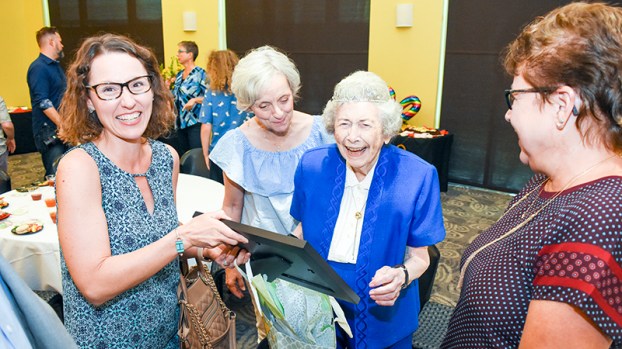 When she’s not tracking steps with her Fitbit or grocery shopping, there’s nothing Catherine Hicks would rather do than read books on her iPad.

Of course, Hicks doesn’t fall in the typical age range for that kind of technology. Hicks celebrated her 100th birthday on Saturday at LaGrange College, the school she graduated from in 1939.

Her family flew in from all over the world, and many friends attended as well. Hicks said that’s all she wanted for her birthday.

Hicks’ family got her a 100th birthday tiara for the special occasion, which was held at the college’s Turner Hall. Hicks’ late husband, A.M. Hicks, was a longtime professor at the college, and all four of their children attended the college at some point in their lives.

Hicks hardly sat down throughout the day, as she walked from table to table talking to all of the guests.

“She’s like that all the time. She always has a good time,” said her daughter, Sue Edmondson. “She has a wonderful outlook on life.”

Hicks was born in Pickens County, South Carolina, near the small town of Six Mile. Edmondson said her mother had a tough childhood, including the loss of her own mother at 3 years old, but she’s always had a great demeanor.

“She has never been on any type of medications. She is active, and she walks a lot. She has a Fitbit, and she walks, and she’s happy,” Edmondson said. “She just has a good attitude, and I think that’s it more than anything else.”

Her son, Joe Hicks, flew in from Japan to celebrate. He said Catherine is in such good shape that he’s often the one trying to keep up when they run errands together.

“She runs around the grocery store, and I have to keep up with her,” he said with a laugh.

Hicks was in her 90s then, but even at 100, she doesn’t plan to slow down. Her family believes her faith and attitude have been the key to such a long life.

“I think [her childhood] made her very resilient, and I think her faith helps that a lot,” Joe said. “She has a very mild personality. She doesn’t get upset very easily.”

Emergency personnel from across the United States are helping in the Carolinas as Hurricane Florence makes landfall, and five members... read more