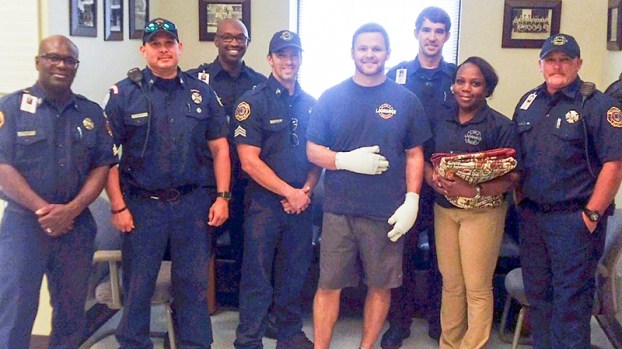 Jonathan Williamson visits the LaGrange Fire Department headquarters Monday after being released from the hospital over the weekend. (CONTRIBUTED | Daily News)

A third LaGrange firefighter injured in a structure fire on Labor Day is released from the hospital.

Jonathan Williamson was released Saturday from the Joseph M. Still Burn Center in Austell and continues to recover at home.

Williamson visited the LaGrange Fire Department headquarters on Monday and visited with his fellow firefighters.

Josh Williams remains at the Augusta Burn Center. He received burns to 30 percent of his body and is expected to stay for at least a few more weeks.

T-shirts are being printed to help raise money for the firefighters and their families for $20. Anyone interested can come by city hall at 200 Ridley Avenue to purchase the shirt.

To help support the families affected, a family friend set up a GoFundMe account. City leaders have confirmed this account is legitimate. The money raised will be distributed among all four firefighters.

Cards can be sent to the LaGrange Fire Department at 115 Hill Street, LaGrange, GA 30241.

Cards can also be given to Dion Senn, the City of LaGrange Public Services Director at dsenn@lagrangega.org or (706) 881-4563. Senn plans to take the cards and donations to the firefighters on Friday.

When she’s not tracking steps with her Fitbit or grocery shopping, there’s nothing Catherine Hicks would rather do than read... read more