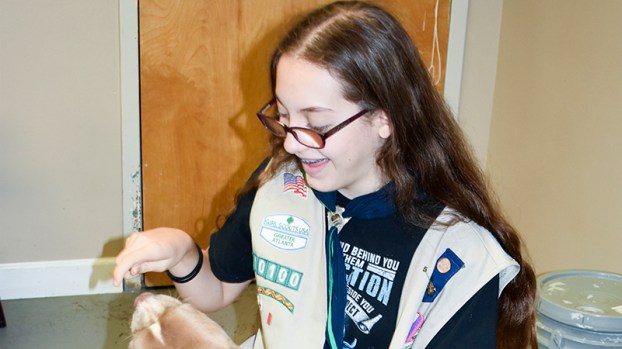 Lillian Bono plays with a dog at the LaGrange-Troup County Humane Society. Bono’s award winning Girl Scout project. Bono won the Silver Award for the project, which helps dogs that wouldn’t do well in a shelter environment. (ALICIA B. HILL | Daily News)

What happens to a dog is too young, too afraid or too injured to move directly into the local animal shelter or humane society? Typically, animals in that scenario wouldn’t have a high survival rate, but a local ninth-grader is working to change that with a Girl Scout project designed to help dogs who aren’t ready for a shelter setting.

Lillian Bono received a Girl Scout Silver Award in July for developing a program to foster dogs who need more attention than they could receive in a shelter setting. The Silver Award is the second highest award in Girl Scouts, and it is generally tied to a project that the scout is passionate about and will improve the community. Silver projects should be self-sustaining, and Lillian is working to ensure that local volunteers keep this foster program going for years to come.

“Just knowing that I probably saved a lot of animals from having to be put down because there is nothing else you can do with them [is the best part],” Lillian said. “[People] think they are aggressive or something, or if they are sick, they have to be treated, and they have to be put down. We can save them through fostering.”

When Lillian lists the dogs that she has fostered, she talks about them like a proud parent with pride in their recovery and joy for the dogs who now have permanent homes. She even marked the date when she first officially started working on the program — Dec. 18, 2016.

“The first fosters we had were Lucky, Lucy and Jupiter, but Jupiter was adopted after a day,” Lillian said. “Lucky and Lucy we had from early October [to Christmas Eve].”

The puppies were about five weeks old, and Lillian’s mother, Mandi Bono, said they probably would not have survived without someone to get up and feed them around the clock. Mandi is the director of the LaGrange-Troup County Humane Society.

“They were too young to survive in the shelter,” Mandi said. “And, the city does not have a foster program, so we actually adopted them and brought them home with the intention of finding them a family. We call them our first fosters.”

Lillian also works with some of the dogs who need a little one-on-one training before they are ready to go home with a potential family. However, some of the most striking stories she shared were about dogs who needed somewhere to stay outside the shelter setting to heal from injuries.

“Or, if they have a medical issue [we foster them]. One of our dogs, Buddy, who we had to foster, he had crawled into an ant bed, and he had [bites] all up and down his neck,” Lillian said. “He couldn’t be in here [at the humane society].”

Mandi said that it would have been difficult for Buddy’s injuries to heal properly in the shelter setting.

“They have to stay dry when they have some kind of skin something going on, and the way the cleaning is done here, the floors are always wet,” Mandi said. “That is not conducive to healing the scabs and the scars on the surface in particular.”

Buddy stayed with the Bonos for about a week, while he was on antibiotics.

“In those emergency situations, we can be used if we need to,” Lillian said of the foster program.

Because Lillian was in middle school when she researched and got the project going, she was not eligible for the Gold Award, but that did not in any way diminish the potential long-term impact of the project.

“Lily is very bright and motivated,” said Tracy Eley, Lillian’s Girl Scout Leader. “I was amazed that she picked such a forward-thinking project. Really, her silver award project that she chose is at the level of a lot of the Gold Award projects that older girls are doing.”

Mandi said that Lillian brought in roughly a dozen foster dogs since they first brought in the puppies, two years ago. She also said that while shelters are good for most dogs, they don’t meet the needs of every dog.

“The shelter environment is wonderful for large scale, but when you have individuals with medical needs, the shelter environment is not the best place for them,” Mandi said. “They need something a little more one-on-one then they can get here, so what she put together was a way for them to be able to be fostered for short-termed fosters, get them back into the shelter quickly so that people can see them because if they’re not here for people to see, they are not going to get adopted.”

“I hope that it ends up allowing more people to adopt them out because they like the dogs we’ve fostered,” Lillian said. “They get to be adopted, and that leaves more room where eventually, we have to bring dogs in — like some of the other state where they have to bring dogs in through [Puppy] Pipeline for people who want them. So, we could help somewhere else, and we could have less dogs out on the street who won’t be able to get help.”

The foster program will not be able to reach that goal alone, but it does have the potential to save the lives of dozens of dogs every year in Troup County.

“This is going to positively affect the lives of many hundreds of thousands of dogs in Troup County in the future and hopefully keep them from being euthanized at the shelter,” Eley said.

To learn how to volunteer with the LaGrange-Troup County Humane Society or the foster program, call (706) 298-3608.

A third LaGrange firefighter injured in a structure fire on Labor Day is released from the hospital. Jonathan Williamson was... read more