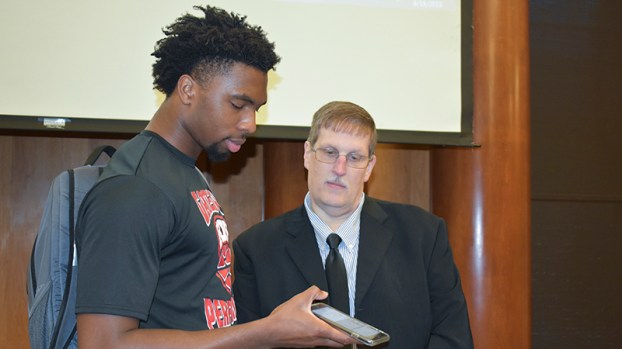 Troup County Elections Supervisor Andrew Harper (right) explains to Lincoln Anderson (left) how to register to vote from his smart phone on Tuesday at LaGrange College. --Alicia B. Hill

In honor of Constitution Day, LaGrange College students met on Tuesday to learn about the importance of voting and how to fill out an absentee ballot if they won’t be able to return home to vote in November.

Constitution Day was created to celebrate the signing of the U.S. Constitution, and LaGrange College Political Science Professor John Tures organized a nonpartisan event to encourage students to take an active role in government by voting.

“Voting is an important right that we have and we can exercise it,” said Jamarcus Watkins, a LaGrange College student who spoke on the importance of voting at the event. “Many governments around the world don’t allow citizens to take in electing positions, so they get no say whatsoever. It is very important that you get out and vote.”

Troup County Elections Director Andrew Harper was the guest speaker at the event, and he walked students through important issues like registering to vote, how to fill out an absentee ballot and the importance of students doing their own research on candidates.

“There are many different ways to register to vote,” Harper said. “The easiest one that I can tell you right now is every one of you more than likely has a smartphone. If you are not registered, you can register from your smartphone. You can download the GA SOS app for Georgia if you are living in Georgia.”

“Many students don’t believe that their vote matters, but recent history has shown that elections can be decided by a handful of votes, Watkins said. “… One of the biggest issues with young people today is they feel like their voice is not being heard. One of the things that I have noticed especially with college students here on this campus is that people like to complain. They don’t like to be a part of the solution.”

Harper noted that a recent City of West Point race was determined by less than five ballots.

Additionally, students were encouraged to print out and review sample ballots.

“Do they have the same beliefs as you? Because two different people are going to have two different views, but we vote for the same person because some of their views I agree with, some of them I don’t. It depends on what your candidate is willing to tell you about what they want to do.”

Harper also encouraged students to get involved with a campaign that they are passionate about at least once in their lives.

Meanwhile, Tures explained to students that government policies tend to favor those who vote, but unfortunately, few college age adults tend to vote.

Tures and Watkins both pointed out some of the policies that could be impacted by young voters.

“Politicians are constantly making decisions about higher education costs and student loan policies,” Watkins said. “These and other issues prove we have an economic interest in every election.”

Annual car show to be held at LaGrange Mall

By Libby Criswell Special to The LaGrange Daily News The Georgia/Alabama Antique Automobile Club of America will host the 37th... read more