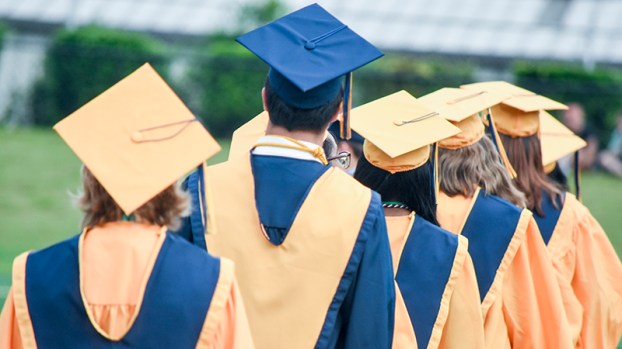 Troup High School graduates walk on the field at Callaway Stadium in May. --File Photo

The Troup County School System saw its graduation rates rise across the board, and they are now higher than the state average.

The Georgia Department of Education released the 2018 graduation rates Tuesday, and the numbers showed increases across the state. TCSS’ overall graduation rate increased to 84.1 percent, an increase from last year’s rate of 78 percent. The statewide average was 81.6 percent, the highest in state history.

“Look at where they came from in 2015. They were down in the mid-70s, and now they are higher than the state,” Nichols said as part of his presentation. “The system wide average is 84 percent. We’re excited about that.”

Every high school in the Troup County School System saw its graduation rate increase this year when compared to last year.

Troup High School had the highest graduation rate in the county at 87.2 percent, an increase of 11.4 percentage points since 2015.

Callaway High School’s graduation rate is now at 84.1 percent, equaling the school system’s overall percentage. Callaway has seen the biggest rise of all of the TCSS high schools since 2015. Back then, Callaway’s graduation rate was 67.2 percent, but it has risen 16.9 percent in the three years since.

Laney said some of the students at the high school have jobs or play numerous sports that they have to juggle.

“We started really looking at every single kid and their needs and making sure we had the staff and the strategies to support them, and it’s paid off,” Laney said.

The Georgia Department of Education saw its statewide score rise a full percentage point this year. The state’s overall rate has climbed every year since 2012.

“Georgia’s graduation rate continues to rise because our public-school students have access to more opportunities than ever before,” said State School Superintendent Richard Woods in a press release. “From career, technical and agricultural education to dual enrollment to the fine arts, there is an unprecedented emphasis on supporting the whole child and making sure every single student understands the relevance of what they’re learning. I’m confident we’ll continue to see these gains as long as we’re still expanding opportunities that keep students invested in their education.”

According to the GDOE press release, Georgia calculates its four-year adjusted cohort graduation rate as required by federal law. The rate represents the number of students who graduate in four years divided by the number of students in the graduating class. The class number is updated as students transfer in and out.

Nichols said the school system’s credit recovery program, which allows students to catch up in subjects they fall behind on, has helped the graduation rate too.

“A lot of the reason students drop out of school is because they’ve fallen behind their peers and they don’t want to be left behind,” Nichols said.

He also talked to the Rotary Club about other challenges the school system faces, such as attendance. In 2018, 53 percent of students were absent less than six days, according to information released from the school system. The number of students absent was similar to the previous three years, despite high school students being able to win a car if they were in class and had no behavioral issues.

“We haven’t been able to solve this one,” Nichols said. “This is the next one we’ve got to tackle.”

Nichols also discussed reading scores, showing a slide as part of his presentation that put third grade reading scores below the state average.

“We ought to be a school system that other people are coming to visit to copy from,” Nichols said. “We’ve got the wherewithal to do that, and we’ve got the people to do that. I think it can be done, and it will be done.”

Troup County School Board Chairman Kirk Hancock also provided an update on the superintendent search. The school board is expected to vote on a search firm to lead the hiring process at Thursday night’s meeting.

On Tuesday, Troup County honored employees for their years of service. The quarterly event is an opportunity for the county... read more