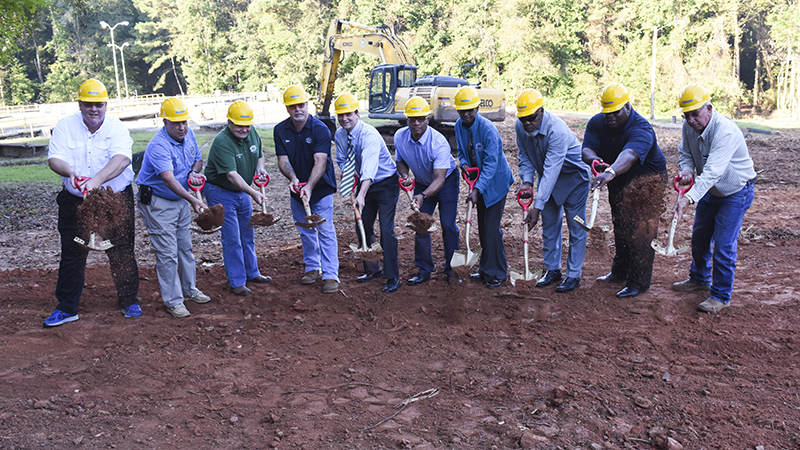 A groundbreaking 10 years in the making was held Thursday morning in Hogansville.

Officials from Hogansville and Meriwether County, PF Moon Construction leaders and other representatives held a groundbreaking for the new wastewater treatment plant on West Main Street, about a decade after the project was first discussed.

“It’s a long overdue project,” said Mark Hammond, Hogansville wastewater superintendent. “The city has to have a wastewater treatment plant to expand and grow. It’s a very much needed project.”

The total cost of the project is $8.706 million dollars, according to Hogansville City Manager David Milliron.  The project is being paid for by two USDA loans totaling over $5.5 million, a $2.5 million USDA grant and $1.6 million from the Meriwether Sewer Authority.

The plant will increase the max flow to 1.5 million gallons a day, up from the 650,000 gallons currently possible.

Hammond said the project is estimated to be 95 percent complete by December 2019.

“Hopefully, if everything goes as planned, we would be on line January 2020,” Hammond said.

Hogansville Mayor Bill Stankiewicz said the plant is important for economic development for the city.

“We are looking at maybe 400 new homes in Hogansville, and we couldn’t even contemplate that without this project because we wouldn’t be able to handle the infrastructure,” Stankiewicz said.

“We couldn’t do our industrial park without being a partner here,” Dunaway said. “As we get people that look at the industrial park, one of the questions they ask is ‘what is your capacity on sewer?’ Now we can actually point on the ground, say here it is, here’s what we’ve got.”

The entities first discussed the wastewater treatment plant ten years. Both Hogansville and Meriwether County applied for funding for a plant then, and the Environmental Protection Division asked that the two entities partner up.

Dunaway said the money for Meriwether County’s portion of the project came from a bond from ten years ago. Tipping fees from the landfill paid the bond off, Dunaway said.

The plant will direct discharge into Yellowjacket Creek. The city of Hogansville currently uses spray fields, which will no longer be used.

“It’ll be put back in the stream cleaner than the stream,” Dunaway said.