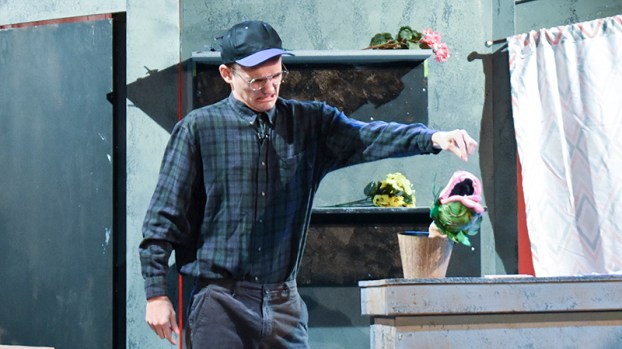 The Lafayette Theatre Company brought to life one of theaters most infamous plants on Thursday with the grand opening performance of “Little Shop of Horrors.”

The play is closely tied to the comedic 1986 sci-fi, horror film with the same name, and features a pop and rock score performed in the LTC Black Box Theatre. As the musical progresses, the characters’ problems will grow along with the show’s iconic plant.

“I saw this show the first time when I was about 9-years-old off Broadway with my parents and have just loved it ever since. It is really fun to be able to do this gritty, bluesy, mean character,” said Beth Tures, the voice of Audrey II.

Tures said that she auditioned with her daughter, and they have enjoyed having extra time together during practices.

“I’m playing this nerdy or dorky kind of character, and it is really fun,” said Matthew Klinger, who plays Seymour Krelboyne. “… It is a progression. In the beginning, he knows nothing, and he has no confidence because no one has ever told him that he can do anything good. I think it plays into the idea of a narcissist. When people start telling him that he is actually a great person, he goes to the moon with it. It is a complete arc from one end of the spectrum to the other.”

The comedic nature of the play also left plenty of room for fun.

“I get to go really crazy, being a psycho dentist and channel my inner Steve Martin [who played my character in the movie],” said Randy Powell, who plays Orin Scrivello, one of the play’s antagonists.

This performance features several first-time performers on the LTC stage, including some local high school students.

“It is a pretty wide age [range in this] group, so we have kids who are still in high school, some college, some graduated, [some older],” said Abigail Moore, who plays Audrey. “So, it has been a fun dynamic having a bunch of different people to work with. Everyone has really high energy.”

The cast encourages everyone to come out and enjoy the fun and horror of the play.

“It is a really fun show, and I hope that people come see it,” Moore said.

How do your electricity bills compare to others around the state? The Georgia Public Service Commission’s municipal summer and winter... read more