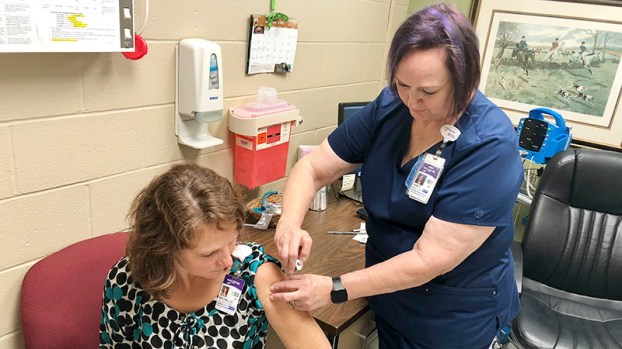 Last year was one of the hardest hitting flu seasons in the last decade, and according to numbers from WellStar West Georgia Medical Center, a small number of cases are already impacting the LaGrange and Troup County communities this year.

According to a press release from the hospital, WellStar West Georgia has had 10 total cases, starting with five the week of Aug. 19-25. The numbers include inpatient and emergency department patients. Flu season typically starts in October, so the cases seen so far have definitely been earlier than most years.

“We had six confirmed positive flu cases in about a week’s time near the end of August, predominantly pediatric cases, but not all,” said Dr. David Ferner, WellStar West Georgia’s emergency department medical director. “Of the adults who tested positive, we had one who also had developed pneumonia and had to be admitted to the hospital.”

Ferner has worked as an emergency room physician for 24 years, so the early figures have given him pause. The hospital has also already had young patients and elderly patients come down with the flu this year.

“We have had one as young as 2 months all the way up to age 75,” said Michelle McMickin, WellStar West Georgia’s infection prevention manager.

The hospital has had seven cases of the type B strain and two type A cases. One patient had both strains of the flu. Last year, the A strain started as the harder hitting flu-strain, but the B-strain started becoming more prevalent as the flu season continued, according to WellStar statistics.

Ferner said based on the normal flu season, which runs from October to May, six or seven cases seemed to be an atypically high number for the end of August.

“We already are seeing an atypical season, though with the flu, one can’t predict what that will mean for the rest of the season,” Ferner said. “It could mean it will be a horrible season again, or it could mean that since it seems to be starting early, it will taper early. But we’re taking cues from it and are taking it as seriously as we can, because, as we all learned from last year, people’s lives depend on it.”

“We’ve also been talking with pediatric offices in the community, and they said they are seeing positive cases just like us,” Ferner said.

Emory at LaGrange has not had any positive cases, but they’ve seen flu-like symptoms.

“We’ve had call-ins from patients whose family members had tested positive,” said Doctor of Nursing Practice Marliss Magill, who works in internal medicine at Emory at LaGrange. “So far, we have not had a positive case, although we have seen great numbers of people with flu-like symptoms and a lot pneumonia, bronchitis and upper respiratory infections — probably more so than normal for this time of year.”

A total of 145 Georgia residents died from flu-related illnesses last year, compared to nine the previous year. One of those deaths was a 63-year-old LaGrange man.

“We would recommend flu shots earlier this year because there have been documented cases already throughout Georgia,” Magill said. “It is predicted to be worse this year, especially in light that the flu shot did not cover the flu well last year, and there were increased number of deaths as well.”

The flu shot was about 30 percent effective last year, according to the CDC. Magill said that’s another reason to get it this year.

“Each year they try to perfect the flu shot and improve on it. Just because it wasn’t effective last year, it’s even more important to get it this year so you’re covered,” Magill said.

Statewide numbers are not yet available for the flu. The Department of Public Health tracks hospitalizations and influenza related deaths during flu season.

Last year, WellStar West Georgia Medical Center treated 230 inpatient and emergency department patients during December 2017 and January 2018 — the peak of the season locally — compared to only 77 flu cases in that same timeframe the year before.

Ferner said the emergency department staff is already wearing masks and gloves, isolating patients with fevers or other flu-related symptoms, re-familiarizing themselves on flu symptoms, and being hypervigilant about hand-washing.

Last year, the hospital implemented special visitation guidelines to help slow the spread of the flu virus. Those limitations were lifted after flu season, and hospital administrators are monitoring the season this year to see if anything similar is necessary for 2018-2019.

Hayla Folden, public information officer for District IV Public Health, said the Troup County Health Department has the vaccine available, including the high-dose vaccine recommended for anyone over the age of 65. Medicare covers the cost of the high-dose vaccine. Folden said anyone interested in getting a flu shot needs to make an appointment.

The CDC recommends getting a flu shot before the flu begins spreading. It takes two weeks after vaccination for antibodies that protect against the flu to develop in the body.

The CDC recommends the flu vaccine for all people age 6 months and older.

The public is invited to join the City of LaGrange and the U.S. Army Corps of Engineers for a litter... read more