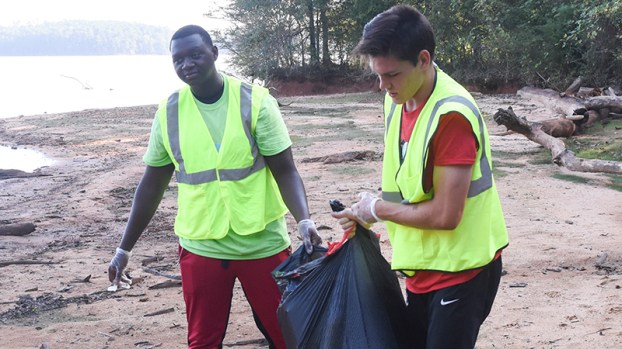 Volunteers, City of LaGrange employees and the U.S. Army Corps of Engineers participated in a clean-up day at West Point Lake Saturday.

The event was held as part of the annual National Public Lands Day event and included litter cleanup near the lake and the construction of fish attractors and birdhouses.

“A lot of people are out today,” said David Barr, supervisory park ranger for the corps. “We’ve got around 200 volunteers who have come here today to clean up the shoreline around West Point Lake, work on building some fish attractors, some bluebird houses. It really brings the community out to see what’s in their backyard.”

City employees had their hands full at McGhee Bridge Park, where all sorts of trash had washed up on the shore. Members of the LaGrange Youth Council also helped with that portion of the cleanup.

“It is such a problem. It’s visual litter and to me the pride of the community is in how clean the community is,” said Gail Hunnicutt, who volunteered Saturday. “I want people who ride around this lake to think ‘oh, LaGrange is really [clean] because they manage their litter, and they’ve educated folks, and they must take pride in their community because there isn’t that much litter.’”

Down the road at Holiday Campground, the volunteers included a large group of Boy Scouts from Troup County. The 25 scouts were from Pack 324 and Troop 125.

“We are camping out for the weekend and doing a local conservation project,” said Llana York, who was one of the scout leaders.

York said the project is a great way to get the scouts outdoors and to held the community.

“It’s important to instill in them a sense of civic responsibility and also with the conservation, they are learning about our environment and their impact on it,” York said.