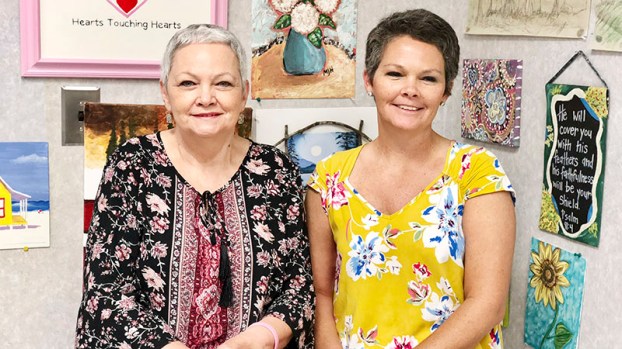 Jackie Benefield and Tracy Storey have both been diagnosed with breast cancer in the last year and a half. --Contributed

Mom, daughter supporting one another after cancer diagnosis

Then, just five months after her husband died, Benefield was diagnosed with breast cancer herself. It was Stage 1 aggressive mammary carcinoma, and it was growing quickly.

“We’ve been so fortunate for our family and friends to get us through everything that has happened,” Benefield said. “It’s been hard, losing Dewell and then seeing my daughter go through what she has. I’ve worried more about her than I have me.”

Always one to get her yearly mammogram starting at age 40, Storey was on a 4-mile walk with her sister-in-law when she noticed her left underarm was hurting. She decided to go three months early for her yearly mammogram at the Women’s Health Center at WellStar West Georgia Medical Center. A biopsy by Dr. Grant Major revealed what she didn’t want to hear.

Storey began her first of six chemotherapy treatments at WellStar West Georgia in September and finished in January. She also had 33 radiation treatments and three surgeries, including a bilateral mastectomy and reconstruction. She is continuing rounds of the immunotherapy drugs Herceptin and Perjeta and will have one additional surgery in December.

As Benefield was supporting her daughter through her breast cancer journey, she herself began experiencing pain in her right arm and shoulder. At first, she thought the pain might have been osteoporosis or a result of caring for her husband before he passed away.

“Had it not been for Tracy and my sister-in-law, I probably wouldn’t have gotten it checked out by getting a mammogram,” she said.

“I’m glad they kept ganging up on me and forcing me to go.”

After her diagnosis, Benefield had surgery in January of this year for a lumpectomy and to remove lymph nodes. She began chemo in February 2018, and the mother and daughter had two chemo treatments together. Genetic testing revealed that the two did not carry the BRCA1 or BRCA2 gene, inherited genes that can place an individual at a higher risk for developing breast or ovarian cancer.

Both women have experienced firsthand how, even with insurance, out-of-pocket expenses for those experiencing cancer can place a huge financial burden on families. In August, the Hoochee Coochee Kayakers and GLL Marine sponsored the Treasure the Chest Kayak Parade and Fundraiser, and 100 percent of the proceeds helped Storey and Benefield with their expenses.

This year, Benefield and Storey also plan to be a part of Paint The Town Pink and the H.O.P.E. For A Day Walk on Saturday, Sept. 29. The event is sponsored by WellStar West Georgia Medical Center, H.O.P.E. For A Day, and the Breast Friends For Life breast cancer support group.

“Until this year, it’s not something we would have thought as much about being a part of, because last year I had just been diagnosed and was so sick,” Storey said. “But after all we’ve gone through this year, we know how important it is to feel the love and support from family, friends and the community as you put one foot in front of the other to make it through such a difficult journey.”

Paint The Town Pink and H.O.P.E. For A Day is an annual breast cancer awareness and fundraising event that brings together hundreds of community members to raise money for local breast cancer patients, to provide free clinical breast exams and mammogram vouchers to qualified women and to celebrate survivorship and hope.

Since its inception, the H.O.P.E. For A Day Walk has raised more than half a million dollars for breast cancer patients and their families in Troup and surrounding counties.

Paint the Town Pink not only educates women on breast cancer but also provides the community education and awareness on a variety of women’s health issues. The event features 25 to 30 booths that offer information on prevention and awareness. Raffle drawings will be held throughout the event, including one for a handmade quilt made by the Golden Sew ‘N’ Sews at The Active Life.

Volunteers, City of LaGrange employees and the U.S. Army Corps of Engineers participated in a clean-up day at West Point... read more