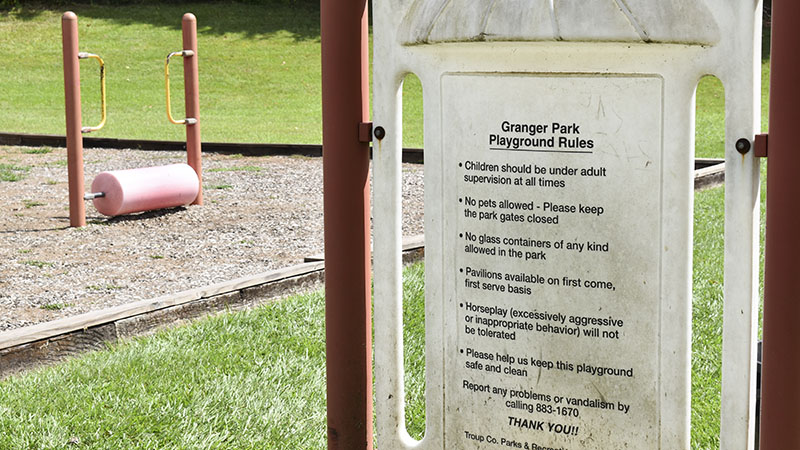 A sign at Granger Park shows the park rules. The council is considering updating signage at parks to clarify the rules. --Alicia B. Hill

Local governments maintain a delicate balance when attempting to ensure citizens remain safe without encroaching on personal freedoms.  The City of LaGrange attempted to better define that balance on Tuesday when citizens complained about regulations regarding use of parks for large events.

During Tuesday night’s city council meeting, representatives for Tribe Ujima, a local group that promotes community relationships, said that city park requirements unfairly impact some in the community. The group questioned why large groups need to register in advance to use a city park and said park rules and usage requirements were not clear.  The group also asked why a certified peace officer was required for groups of more than 50 people and specifically mentioned a ban on bouncy houses in city parks.

“We weren’t aware of [the updated rules]. Five months ago, we could do it,” said Alonza Roberts with Tribe Ujima. “Then all of a sudden, [one day], we are told that we can’t have tents, and we can’t have bouncy [houses]. Chris Hudson [with Tribe Ujima] said there are no signs to say we can’t have anything here. It is a public park, so I’ve come to address the city to ask you all what do you all consider public parks?”

An event sponsored by the group came under scrutiny earlier this month when officers from the LaGrange Police Department received calls on roughly a thousand people gathered at Jones Street Park, otherwise known as Beltline Park. The event was advertised as family friendly fun, but council members and LPD worried that because safety precautions were not in place, someone could have gotten hurt. The city is legally responsible for city parks, and according to Thornton, the changes to regulations on city parks were passed by the city council two years ago and were advertised at that time.

During the work session earlier in the day, the city council discussed placing clear signage in city parks outlining park rules while showing that they are city parks. There are 15 city parks in LaGrange, and the city has discussed clearer signage at all parks in the past. However, there are still city parks with little or no signage.

“With regard to the name and the laws, I know years ago, [Troup County] Parks and Recreation took this up and said they were going to do it [install signage] as they upgraded the parks,” said former Council Member Norma Tucker, who attended the meeting. “When the new director came on board — that has been the better part of two years ago — he expressed that some things would be improved and names would go up, along with signs with the hours of operation.”

The council agreed that posting a simplified version of the city ordinance would be a good step to ensure everyone is aware of city park rules.

“Some of these rules might could be abbreviated,” Mayor Jim Thornton said during the work session. “No alcohol [would be fine]. You don’t have to say, ‘Alcoholic beverages are prohibited.’ You can just say no alcohol, but I like the idea of having a sign that identifies the main rules.”

Thornton said the signage would need to cite the city code in case someone wants more information on the rules. The city would be able to make its own signs. City Clerk Sue Olson and Thornton both said the signs would not cost much.

However, the council did stand by the rules outlined in the city ordinance, while allowing for some discretion from the city manager, due to incidents that have occurred in LaGrange’s parks in the past. This caution was reinforced by the description of a large event at a local park earlier this month that LaGrange Police Department officers worried could have easily taken a turn for the worse.

“This had the likelihood of being something very similar to what happened at Calumet Park roughly 10 years ago, when we had multiple people shot,” LPD Lt. Mark Kostial said. “There were in excess of a thousand people at this event.”

According to Kostial, despite a requirement of an off-duty certified peace officer for security — which could be from the LPD, the Troup County Sheriff’s Office or another law enforcement organization — the event’s only security was a man walking around with a shotgun, and several aspects of the event raised safety concerns for LPD.

“The city streets were being blocked by vehicles and blocked by pedestrian traffic to the point where when EMS and fire personnel were summoned to the park on two different occasions because of difficulty breathing, they couldn’t get ambulances in,” Kostial said. “They actually had to park a couple of blocks away and take their equipment in and wheel them out and transport them from there.”

He also said that the LPD had trouble ensuring that the park closed at the agreed upon time due to the large number of attendees.

City staff has waved requirements for tents and other requirements in the past, and Thornton said Tuesday that the council planned to formalize that process. However, Kelsey said city staff believed that the use of inflatables in city parks was a liability issue, and during the evening meeting, an incident was referenced where a child was injured when a bouncy house deflated.

“We haven’t waved anything with bouncy houses,” Kelsey said. “We prefer that it stays on private property and not public property.”

According to Olson, Calumet Park, Union Street Park, Lafayette Square and Jones Street Park are the most commonly requested locations for events. It was not stated in the meeting when new signage would be installed, but council members agreed that making the information easy to find was vital to good relationships with the community.