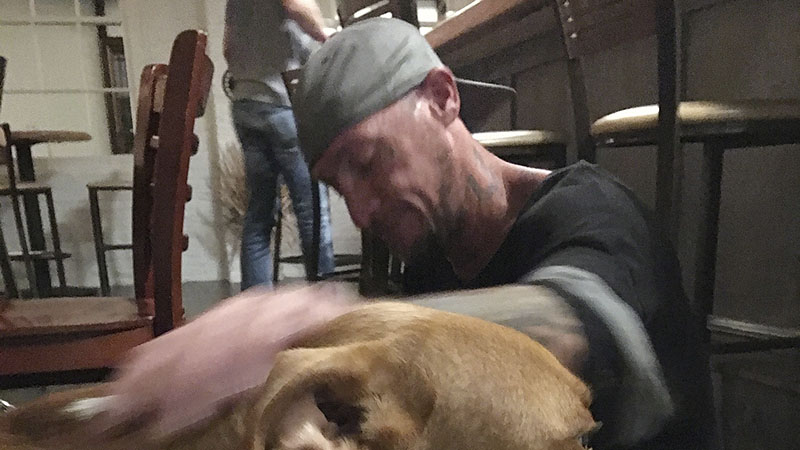 Many questions remain about a man who was hit and killed by a train near Hogansville last week, but one thing is clear — in the hours before his death, he received help from local residents.

Sadly, it wasn’t enough to save David Josh Pursley’s life, but those who interacted with him say the time greatly impacted their own perspective on life.

Pursley, 38, died after being struck by a train on the night of Sept. 21, after two days of working with Hogansville residents to get food, clothing and a cell phone. It’s unclear how Pursley got to Hogansville, but he told people he met he had hopped a train from Alabama.

According to Sgt. Stewart Smith with the Troup County Sheriff’s Office, Pursley’s death is being treated as an accident, but the exact details of what happened are unclear. Pursley had bonded out the Shelby County Jail in Alabama on charges of public intoxication and possession of burglars tools but was part of a work release program, according to the Shelby County Sheriff’s Office records department. His bond was revoked on Sept. 18 after he failed to reappear at work release, although the people who helped him in Hogansville were not aware of that when they helped him.

Ralph Dobbins, manager of the Hogansville Public Library, said he was walking in Thursday morning when he noticed a man sitting outside who looked like he needed some help.

“Typically, I’m not the kind of person who is going to get involved,” Dobbins said. “Something made me want to [do something]. I keep hotdogs in the refrigerator, so I put them in the microwave. There was an empty tea jug that I filled up with cold water for him.”

Pursley ate his food outside but eventually went into the library and told Dobbins that he wanted to connect with his mother on Facebook. Dobbins and library volunteer Ella Shellabarger got him connected, and then made a call to God’s Bread Basket, a food ministry in Hogansville. Terry Rainwater, the director of the ministry, gathered food for Pursley.

“What we did was provide him with several little meals that wouldn’t have to be cooked, probably enough for six to eight meals, along with a couple pairs of clean socks and a duffle bag to put it in,” Rainwater said.

Shellabarger also called Easton Dennis, who helps run Station Coffeehouse downtown. She wanted to know if Dennis could use any extra help at the coffee shop, so that Pursley might be able to earn money to buy a phone and a bus ticket.  The bus ticket would’ve been used to go see his mother in Chattanooga, Tennessee.

“He was getting something to eat, and he was working and that must’ve felt good,” Shellabarger said.

Dennis immediately went over to the library and struck a conversation with Pursley. Dennis said from helping others in the past he knows that more times than not you’re going to get fooled, but he feels it’s worth it to try to find that one person who truly needs assistance.

“If you can put up with that eight or nine of the 10 times, you are going to find that one person that genuinely wanted help,” Dennis said. “I have found that is totally worth getting offended and being conned. I believe David was one of those people who genuinely wanted help.”

Dennis told Pursley that he’d feed and house him through the weekend, if he’d help him at the coffeehouse and with other odd jobs.

“I told him, ‘We’re going to take care of every single one of your meals, and after today, we’re going to get you your phone. If you work the next day, then we’ll get your bus ticket,’” Dennis said.

On Thursday, Pursley did everything asked of him. He washed dishes, helped Dennis set up for a church meeting and stayed ahead of all the duties he was given.

“He had worked his butt off and then he ate his dinner,” Dennis said. “Then after dinner, he just slowly did dishes as they came in the rest of the night.”

On Friday, Dennis had to leave town for the weekend, but others in the coffeeshop were prepared to give Pursley some work. Instead, Dennis received a call saying that Pursley never showed up. Dennis immediately picked up the phone and called Pursley on the cell phone they’d just bought him.

“When he answered, he almost immediately started to break down and began to cry a bit,” Dennis said. “He said. ‘I’ve got to be honest with you man, I escaped from prison.’ He began to express that he was thankful for what we had done. He said, ‘I care about you guys already so quickly that I don’t want to bring this to your business.’”

Dennis thought by that time, Pursley might’ve been well out of town. Instead, a few hours later news began to break that a man had been hit and killed by a train near Bass Cross Road and Hogansville Road.

None of Pursley’s immediate family members were able to be reached for comment, but Alyene Russell, who said she was his ex-fiance, said she’s having a difficult time dealing with his death. Russell said Pursley and her have a daughter together, Violet Reign. She said all-together Pursley had six kids, which was also confirmed through an email from another apparent family member.

“He always told Violet when he came to visit her that he would always be there for her,” Russell said. “I do miss him. I’m trying to figure out a way to tell my daughter when she gets older about her father and tell her more about the good things [about him].”

Russell said she had received a letter from Pursley a few weeks ago, saying he was about to spend two decades in prison in Alabama, but that doesn’t appear to be case.

“He sent me a letter and he said that he was about ready to serve 20 years. He didn’t tell me why. He didn’t go into detail or anything. He said just let my family know and he said he wanted pictures of Violet and stuff like that,” Russell said. “All of a sudden, not a week after that is when I got a message from the sheriff’s office [in Troup County] saying he got hit by a train.”

The tragic ending has left those who met Pursley with a lot of questions, many of which will always be unanswered.

“In the end, it really just didn’t matter. It didn’t matter what he was running from or what his name was or what his backstory was,” Dobbins said. “He just seemed like he needed help. I know there are tons of people around here who are like that and fit that M.O., but it was just something about him that morning that made me stop, and I don’t know. I’m glad I did.”

Dennis spent more time with Pursley than anyone in Hogansville, discussing family and even faith at one point.

“He was seriously already finding a home in one day,” Dennis said. “I attest that to the entire community coming together, both from the library to that floor on the pub that night.”

Dennis had already discussed giving Pursley work for the next week, if he decided to stay in Hogansville a while longer.

Those involved in trying to help him said Pursley has changed their perspective on life and helping those down on their luck.

“You pull up at an intersection and see someone holding a cardboard sign and you think to yourself, ‘Yeah, you’re probably parked over there and this is just a way to make money,’” Dobbins said.

“But, when you see somebody who really has a need like that and is obviously hurting, it was different.”

Troup County Coroner Jeff Cook said a toxicology report is pending, and that funeral arrangements were still unannounced as of Thursday afternoon.