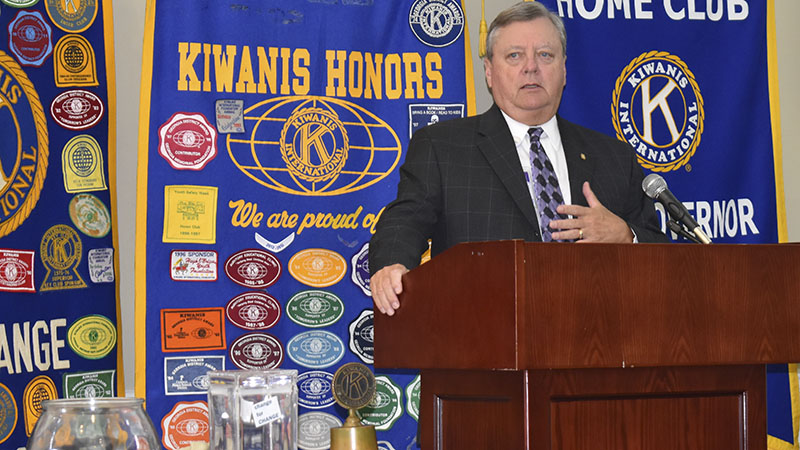 In its first meeting of is new club year, the Kiwanis Club of LaGrange considered the future impact of some of the clubs recent fundraising efforts.

On Thursday, Jerry Fulks, the president of WellStar West Georgia Medical Center, and Dr. Rob Taylor, radiation oncologist at WellStar WGMC, spoke to the Kiwanis Club of LaGrange on the new cancer center slated to be built at the hospital. The Kiwanis Club of LaGrange donated $2,500 for the new cancer center, which is earmarked for a children’s area.

“I sort of interjected myself on this opportunity to come and thank you for the Kiwanis’ contribution that you made to the cancer center project,” Fulks said. “Your $2,500 has been designated for a children’s corner in our resource center and the new cancer center as it is renovated, so that the children will also have a place that is just their size and outfitted just for their enjoyment.”

Fulks discussed the value engineering involved in the project, which he compared to the south tower construction at the hospital that opened in 2010.

“The cancer center project is now a $26 million [project], so those two projects together are approximating what we spent on the whole south tower, which was a $40 million project,” Fulks said. “So, it is growing into a large project. We’ve let the contractor on the endoscopy suite construction, and if there are no further delays in terms of bureaucracy, we will start construction on that endoscopy suite this month.”

He also discussed some of the measures that have been taken to make sure that donations go as far as possible.

“We haven’t actually spent any money that’s been contributed on the cancer center yet,” Fulks said.

“We had a fundraising budget of $10 million, which we have accomplished. The money that you gave along with all the other money from other donors has been invested with the hospital’s funds and has continued to grow, so your gift is probably about $500 more than it was when we received the contribution.”

Taylor also spoke at the meeting and explained medical radiation and how it has changed over the years to the club.

Kiwanis Club of LaGrange meets at Highland Country Club on Thursdays at noon.