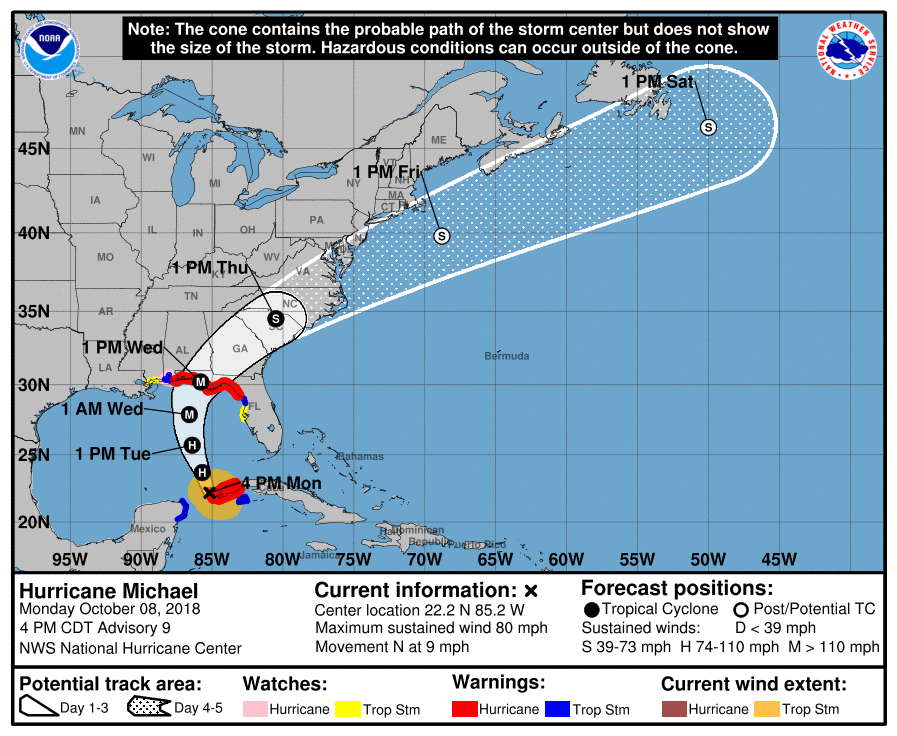 Hurricane Michael is expected to strengthen to a category 3 storm before making landfall Wednesday in the Florida panhandle.

The storm is projected to move into Georgia late Wednesday into early Thursday, but right now the projected impact on Troup County appears to be minimal.

The storm was upgraded to a category 1 hurricane Monday morning and is expected to bring damaging wind gusts, heavy rain and brief, isolated tornadoes to areas in its path. According to the latest projections — which show the storm moving further east than originally forecasted — LaGrange is on the “good” side of the storm, according to Laura Belanger, meteorologist with the National Weather Service in Peachtree City.

Belanger said Troup County is projected to receive between 2 to 4 inches of rain right now and 20 mile per hour winds, assuming Michael’s track doesn’t change to the west.

“Really those highest wind speeds are going to be south of Columbus to Macon, to the Americus and Albany areas,” Belanger said.

Belanger said if the storm does turn west, it “puts LaGrange in a much different situation.” She said in that scenario the forecast would change to an estimated 4 to 6 inches of rain and 30 to 40 mile per hour winds.

“It’s really important that people don’t just dismiss it and say ‘we’re on the good side of the storm, we’ll be fine.’ Make sure they keep up to date on what the forecast changes are,” Belanger said.

Belanger said unlike Hurricane Florence, which dumped rain over the Carolinas for days, Michael is a fast-moving storm that would be out of Georgia by Friday. The current track has it making landfall by Wednesday morning and arriving in Georgia by Thursday morning.

The storm has prompted hurricane warnings along the Florida panhandle.