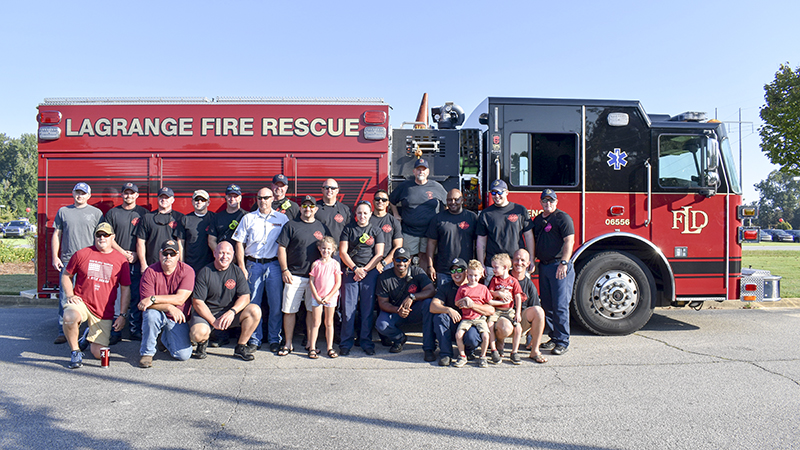 Firefighters gather for a photo on Saturday. (Alicia B. Hill | Daily News)

Fire trucks, jeeps and motorcycles filled the parking lot at the Mike Daniel Recreation Center on Saturday as people from LaGrange and the surrounding areas came together to show their support for the four LaGrange firefighters who were hospitalized following a Labor Day fire.

“It is awesome,” said Jordan Avera, who was injured in the fire and attended the event Saturday. “Support has come from city management and other fire departments all over the state. It is just unbelievable.”

Avera received second and third degree burns in the fire, but as of Saturday, he said he felt much better.

“I feel great,” Avera said. “I’m glad to be home. I’m glad to be out of the hospital, and I got to visit Josh [Williams, who was also injured,] the other day. That boosted my spirits of course. We all keep in touch, and I’ve been doing really, really well.”

The ride was one of several events including a boot drive, a golf tournament and t-shirt sales that have gone to benefit the firefighters.

“We are just doing this to help these guys who were injured,” said Sgt. Mike Webb, the accreditation manager for the LaGrange Fire Department. “The fire department is a family, and we are just trying to help out with all the medical bills and [a difficult] financial time — to show them that they are loved. We are here to support them.”

LFD firefighters were the ones supported by the event, but representatives from other local fire departments said they felt a kinship with Avera, Williams, Pete Trujillo and Jonathan Williamson.

“The four guys who got hurt, they are our brothers, so we wanted to do everything we could to help them out,” said Chief Michael Williams, a battalion chief with the Troup County Fire Department.

All proceeds from the ride went to the four firefighters injured in the Labor Day fire.