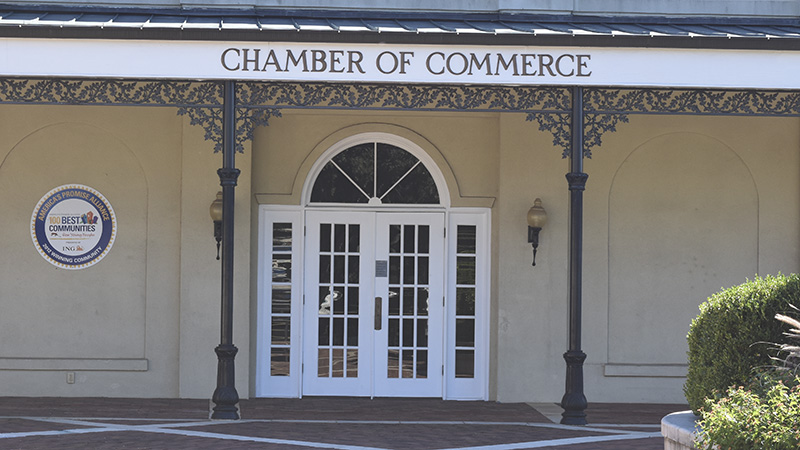 Questions were raised about the city of LaGrange’s tourism budget on Tuesday at the LaGrange City Council meeting. The LaGrange-Troup County Chamber of Commerce manages that budget. --Daniel Evans

The LaGrange City Council responded to public comments on Tuesday evening regarding the management of the city’s tourism budget, which is overseen by the LaGrange-Troup County Chamber of Commerce.

Forrest Johnson, a native of LaGrange and husband of Troup County Archives Executive Director Shannon Johnson, spoke to the council to address his concerns.

“While the city has made great strides in economic development, there is a risk in being held back by a mismanaged bureau of tourism that is failing to meet the needs of its partners in growing this important economic sector,” Johnson said. “I want to make it very clear that the purpose of this is not to malign any individual, I am here to present the council with facts about the bureau of tourism, and its administration by the chamber of commerce.

“These facts include troubling incidents such as a lack of transparency in tourism dealings, missed or late payments on various collaborative projects, rampant failures to communicate with many tourism partners on many occasions, particularly when time is a factor and a lack of regular meetings with tourism partners.”

Multiple city councilmen responded to Johnson’s claims during the meeting, assuring him that the management of the city’s tourism budget was being addressed.

After voting to fund the Chamber’s 2019 spending plan, the city council requested city manager Meg Kelsey perform a preliminary audit of the LaGrange-Troup County Chamber of Commerce, focusing on January 2017 to the present. In an email, Kelsey said she hopes to have the preliminary audit finished by Oct. 19.

“Since Mrs. Kelsey is not here, I’m going to speak on her behalf,” Mitchell said. “She has sent me an email list of approximately 90 ‘red flags’ or things that she wants answers to, of what they were being spent on (during that time). I’m not saying anyone has done anything wrong, but I feel like it is our duty, as public officials, to make sure that money is being spent within the guidelines of the law.”

City councilman Nathan Gaskin expressed concern that tourism dollars are being spent in a prejudicial manner, specifically listing the LaGrange-Troup County Drag Strip and Williams Speedway as businesses that could receive tourism dollars.

“I’ve also had time to review the rulings regarding tourism money and how it is supposed to be spent,” Gaskin said. “I think that, really, we are doing a disservice to minority businesses by continuing practices the way that we are doing them.”

Kelsey, who was in New York attending a work conference on Tuesday, responded to questions via email about the ongoing audit and comments from the council.

“I don’t really want to make any statements without the opportunity to review the checks and invoices,” Kelsey said. “There were a couple of items that I did see that were questionable tourism expenses to me. Mr. Mitchell refers to those as red flags. There are 90 checks that I want to review. These items need more clarification. There may not be issues.”

The city’s tourism budget generates the overwhelming majority of its revenue from the 8 percent hotel/motel tax currently in place, and is funneled to multiple locations. Three percent of this revenue is retained by the city to help maintain its general operating budget, while the remaining 5 percent is required to be used for tourism. Of that 5 percent, 3.5 percent is required to funnel through a ‘destination marketing organization’ which is defined as a private sector, nonprofit entity exempt from federal income tax as a 501(c)(6) operation. The other 1.5 percent can be directed by the city for a tourism product and can funnel through a separate, qualified organization if preferred.

Currently the cities of LaGrange, West Point and Hogansville, as well as Troup County, all levy an 8 percent hotel/motel tax and all choose to funnel the entirety of the 5 percent to be used for tourism through the LaGrange-Troup County Chamber, which is a qualified DMO and is expected to use those funds to promote tourism. Referring to financial statements provided by the chamber from 2014-18, the revenue generated from the hotel/motel tax has increased yearly during that span, from $564,253 in 2014 to $765,349 in 2018. The proposed budget for fiscal year 2019 assumes revenue of $990,775, in large part due to the opening of LaGrange’s Great Wolf Lodge.

This increase in yearly revenue has led to an increased yearly tourism spending plan presented by the chamber, which has drawn the attention of the city council in LaGrange.

“Some of the councilmembers had some concerns about the effectiveness of some of the tourism expenditures,” LaGrange Mayor Jim Thornton said. “Some also had concerns that the tourism budget is rapidly expanding, as a result of the new hotels that have come into the market.”

As a result of these concerns, the city council passed the 2019 spending plan of $990,750, with the provision the chamber provide a monthly expense report for review. Quickly after the vote was passed, the city council requested the audit be performed by Kelsey.

While Kelsey is in the midst of her review, LaGrange-Troup County Chamber of Commerce President Page Estes said an independent audit of the chamber is performed annually by a local accounting firm. In addition, all information requested by the city has been readily provided.

“One thing we do want to clarify is the chamber is audited every year by an independent accounting firm, Gay & Joseph,” Estes said. “I don’t think that’s been clear. The city council has asked for some clarification of specific expenditures.”

Estes maintained the chamber has always been transparent in reporting tourism expenditures on an annual basis, as required by law, and has provided any financial information needed when asked. Providing monthly expense reports in the fashion requested by the council, however, will be a new process. This, according to Estes, is driven in part by the increase in revenue and spending plan, as well as new faces on the city council.

“We have some new council members, who are not as familiar with the process. I think a lot of the scrutiny also comes because we have increased revenue,” Estes said. “With that should come additional scrutiny and additional assurances that we are being good stewards of those funds.”

Estes also gave assurances the chamber has provided all requested transaction information to the city and would continue to remain transparent in its dealings. When asked if the tourism funds have ever been mismanaged or improperly handled by the chamber, Estes’ response was simple.

“Absolutely not,” she said.

In response to Councilman Gaskin’s comments that the tourism dollars are doing a disservice to minority-owned businesses, Estes relayed the chamber’s commitment to partnering with any business that will help bring in out-of-town guests.

“We certainly take those concerns to heart,” Estes said. “We have 100 percent commitment to diversity and inclusivity at the chamber. I think people can tell from our actions we welcome all people from all walks of life, all types of businesses, all types of ethnicities. In terms of the specific organizations that he referred to, we would be happy to talk with them, but we have not received any requests from them specifically.”

Estes did maintain the chamber can improve, and needs to improve, as it relates to communication with the city and its tourism partners, holding meetings, etc.

“We have struggled for 10 years as it relates to tourism meetings and how frequently to meet,” Estes said. “If we don’t have a quorum, we have cancelled meetings. We need to be more forceful, have meetings and show that there wasn’t a quorum, if need be.”

Regarding communication, Estes agreed the chamber should have better communicated its spending plan to the council for the upcoming year, and held off on specifics to ensure the revenue generated from Great Wolf could be expected to match projections.

“With Great Wolf, we needed to be sure of what some of the revenue stream was going to be. If we committed to a plan, but then didn’t have the funds to pay for it, we’re in trouble,” Estes said. “We explained we needed a little flexibility in some of what we were planning. We have said, ‘This is our plan, but we can’t be specific until we see what the numbers are.’

“Hindsight is 20-20, should we have still put our plan out there and said, ‘We might not do this because we may not have the money to?’ Probably. We’ll make sure that we do it differently, that’s where we made the mistake.”