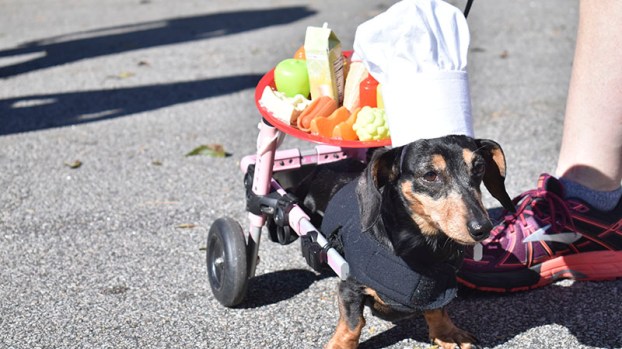 HOGANSVILLE – Hogansville’s annual Howl-O-Ween Dog Parade took place on Saturday, as a kick-off event for the upcoming weekend’s Hummingbird Festival. The dog parade featured more than 50 combinations of owners and animals, most dressed in an assortment of costumes and matching garb. The parade, which has been taking place consistently for two years, draws familiar faces each year, but also saw new faces as well.

“This was our third time participating,” LaGrange resident Mike Ellis said, who came to the event with four dogs, all rescues. “We enjoy the camaraderie. We’re big animal people. We’ve got dogs, cats, horses and donkeys. We enjoy the chance to socialize.”

While some have been in attendance for years to this point, the event also drew those who had previously not taken part.

“I love dogs, and it is fun just to get to dress up and have a chance to paint your face and have fun,” said LaGrange resident Natalie D’Alesio. “This is the first time we’ve been. I didn’t even know this was a thing, but it is really cool. We will definitely be back.”

Winners were announced for the following awards.

The parade played kickoff to the 2018 Hogansville Hummingbird Festival, which will take place Oct. 20-21. This will be the festival’s 21st consecutive year, which serves as the principle fundraising vehicle for the Hogansville Charitable Trust, a 501(c)(3) non-profit that serves to renovate, preserve and improve the municipal properties in and around Hogansville. The festival has raised in excess of $325,000 to this point, but with the influx of matching federal and state funds, this revenue generated has led to more than $3,000,000 in funds that have been used for city-wide improvement.

Anyone driving down North Greenwood Street on Saturday probably saw smoke and fire as a house near LaGrange High School... read more