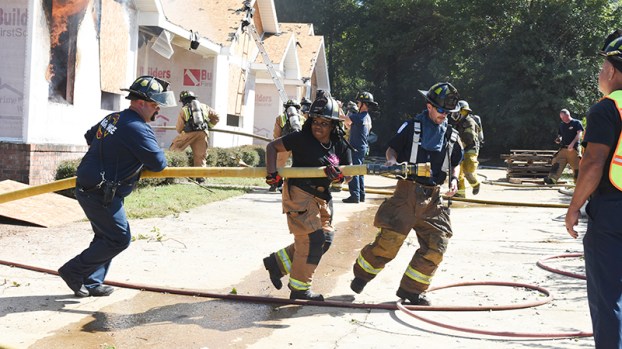 Anyone driving down North Greenwood Street on Saturday probably saw smoke and fire as a house near LaGrange High School was up in flames. However, there was no need to worry.

The LaGrange Fire Department was conducting a training burn on a structure at 602 North Greenwood Street, as one of the final steps for nine recruits just weeks away from completing rookie school.

The structure was being removed to clear space for LaGrange High School’s new athletic facility. Another training burn will also be completed on Highland Avenue on Oct. 27.

“We light fires in specific rooms and have the new recruits go in and apply a lot of the training they have gone through over the past weeks for a fire in a live structure,” said Lt. Rob Vael with the LFD.

The LFD asked the Troup County School System whether they had any structures that could be used for training and were told of two structures with no asbestos concerns being cleared off the property. Vael said the LFD received permission from the state to conduct the training fire.

Before starting Saturday, the LFD took shingles off the roof, removed PVC piping, carpeting and wiring. They started by lighting a fire in the lefthand side of the structure, which was divided into three individual apartments and moved their way through the building.

“We are looking for communication, hose management, nozzle control, proper hose stream patterns,” Vael said. “There may be search involved where we put a man or an item in an area where we have to send in an attack team and a search team in. That’s how we operate. We search every structure.”

Stacey Weldon was one of several onlookers on Saturday. She said the property used to belong to her family and her mother grew up in the house. The original home was torn down about 15 years ago and a triplex was put in its place.

“Before they tore the house down, my grandmother had the most amazing green thumb,” Weldon said. “I don’t know where they came from, but these white Irises, they used to be on this hill. We uprooted some of them to transplant before the triplex was built.”

Early in the day, the LFD had a surprise visitor when Firefighter Josh Williams walked up to the training burn. Williams was one of four firefighters injured in a Labor Day fire and was released from the hospital last week. He had burns to 35 percent of his body, according to the City of LaGrange.  T-shirts are being sold to benefit the firefighters injured in the Labor Day fire. To purchase a t-shirt, call city hall at (706) 883-2000.

With only two weeks left until the launch of Community Action for Improvement’s largest annual project, the nonprofit is stuck... read more