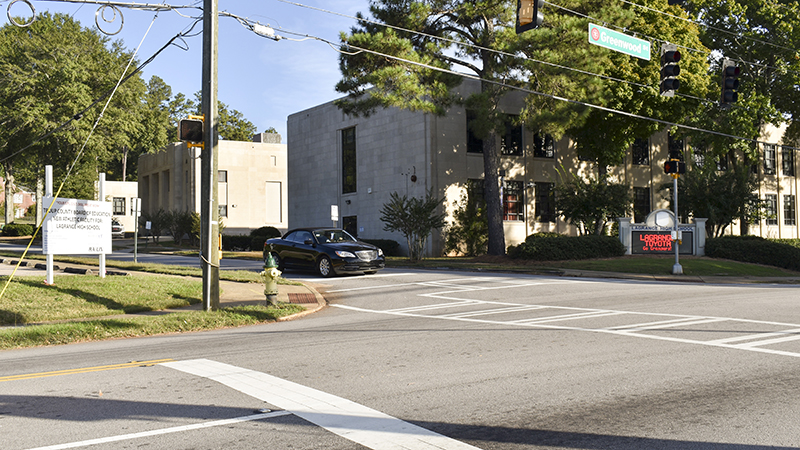 The LaGrange City Council voted unanimously against closing a portion of Highland Avenue at Tuesday night’s meeting. --Alicia B. Hill

The LaGrange City Council voted 6-0 on Tuesday night to deny the Troup County Board of Education’s request to close a portion of Highland Avenue between LaGrange High School and the school’s new athletic complex.

The city council received the request earlier this month but wished to hold a public hearing before voting on the requested road closure.

“We have a request from the board of education to close a portion [of Highland Avenue] from North Greenwood Street to Marshall Street,” City Manager Meg Kelsey said. “This is from our last work session. We have notified property owners along Marshall Street, Bacon Street, Highland Avenue and neighboring residents of this public hearing.”

Representatives from Troup County School System spoke in favor of the closure.

“The school system owns the property on both sides of Highland right there, and with the construction of the new gymnasium and indoor practice field, it is about a 92,000 square foot facility, which will have classes each day going back and forth from the main campus to this new facility,” TCSS Assistant Superintendent of Maintenance and Operations John Radcliffe said. “As you look at the picture, you can see what we are trying to do is make that more of a campus look and feel because it is in downtown LaGrange.”

A large group of residents of nearby streets attended the meeting and spoke against the closure.

The main argument for the closure of the small section of road was that the road could be dangerous for students to cross multiple times a day, when the facility is used for classes.

“The reason that we are asking for Highland to be closed right there is because of the safety factor involved,” Radcliffe said. “There are students going back and forth to classes, and when we have large events that come into the community to support that kind of arena. Keep in mind that the reason for this facility is that the old gymnasium that is currently the large gym on the campus — we’ve had to put quite a bit of money into renovations of that in the last couple of years, and not just renovations, but repair on the floor and so forth. We’ve been advised that building has reached its life expectancy, and we need to do something. We are of course in downtown LaGrange with a large high school campus.”

Council members LeGree McCamey and Willie Edmondson both questioned if the increased traffic caused by directing cars around the school would result in a more dangerous crossing on North Greenwood Street and worse traffic in the area.

“I have some heartburn about closing that street because all that traffic then will go over on Mitchell [Avenue], and if it can’t go on Mitchell, then it will have to go up to Mooty Bridge Road or go down by [Emory] Clark-Holder Clinic,” Edmondson said. “We are trying to open ways to keep traffic moving, and not just back up on one another.”

The council proposed other options to make the crossing safer without completely closing it off to traffic including raised cross walks, an additional traffic light, gates that close during certain times of day or an updated drivable roundabout. Council Member Nathan Gaskin asked if TCSS had considered a sky bridge or a tunnel. Radcliffe said a tunnel had not been considered, and a bridge would be “cost prohibitive.”

Mayor Jim Thornton said that LPD had performed a traffic study, but it is impossible to predict the exact outcome of something that has not been done before. LaGrange High School Principal Alton White spoke about safety concerns for students.

“Between about a quarter to 8 [a.m.] and 8:10 [a.m.], the corner at North Greenwood is a zoo, but we aren’t talking about just one time a day that students are crossing,” White said. “We are talking about a minimum of nine times a day, probably 150 to 200 kids crossing [Highland] Street back and forth. Yes, that intersection at North Greenwood is a zoo pretty much twice a day — before school and after school. … I know that what we are asking is an inconvenience to folks that live in the surrounding neighborhoods. As the principal of the high school, my sole concern is the safety of 1,200 students, and when you start talking about that many kids crossing that street every day — that is why we made this request.”

One resident of the neighborhood did speak in favor of the road closure, but the majority of comments were against, citing increased traffic on North Greenwood, which is also regularly crossed by students, and noting safe ways to cross that are already in place.

“If we were talking about fifth graders, I would be inclined to say that it is definitely for their safety, but we have a stop light, and we have a stop sign,” said Cammie Long, a resident from a neighboring street. “What we are talking about at LaGrange High School is getting these kids ready to go to college.”

The LaGrange City Council voted against the proposed road closure with the understanding that TCSS will approach the council with an alternate proposal at a later date.

Other topics discussed during the meeting included:

Thornton said that the City of LaGrange does not set a date for Halloween or trick-or-treating in the city.

Edmondson announced that the annual Calumet Park tree lighting ceremony will be on Nov. 16 with a parade beginning at 6 p.m. This year the ceremony will honor the six firefighters injured in the Labor Day fire and Jake Sessions, the organizer of the annual “Up All Night” Christmas dinner. In addition to a parade, the festivities will include a community choir and other performers.

A citizen came forward to request that the city reconsider its stance on accepting glass at recycling centers.

Another citizen came forward to ask what the city council is doing to ensure that the area around the Tall Pines Apartments is safe for nearby residents. Thornton said that city code enforcement and LPD were aware of the issues and measures are being taken both by the city and the property owners, including a possible change of ownership.