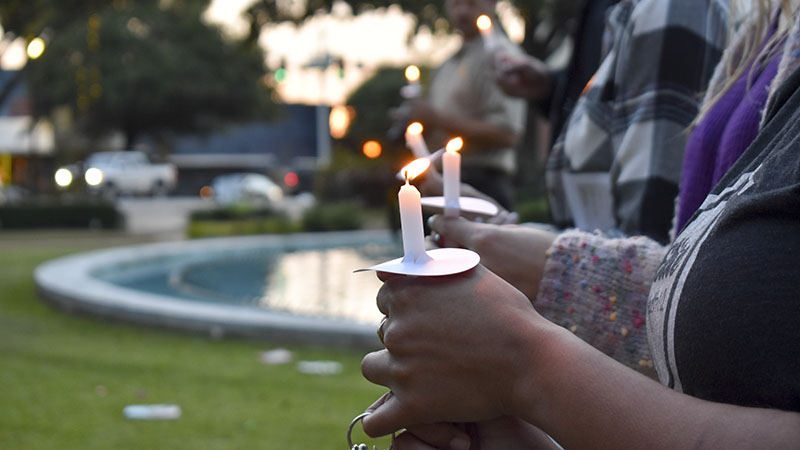 Roughly a hundred people stood on Lafayette Square in solemn silence on Wednesday night as candles flickered in honor of the victims of domestic violence.

Organizers thanked the people who worked day in and out to respond to those in crisis, including members of the Troup County Domestic Violence Task Force and Harmony House workers, but a special focus was placed on faith leaders.

“Law enforcement, faith community leaders — all of you serve on the front lines,” said LaKae Ford. “You hear from those individuals first and foremost.”

Officers from the LaGrange Police Department and the Troup County Sheriff’s Office stood watch over the ceremony, while leaders from different faiths explained on screen how faith organizations should respond to members facing domestic violence.

“A lot of times [when we say] first responders, we think of police officers, but I think that first responder might be that person from church or at the synagogue or at the temple with them,” Bedingfield said. “This is the first time that we’ve ever done a video at a candlelight vigil, and it had a great message. It had the message that forgiveness is important, and forgiveness is what God wants us to do, but forgiveness doesn’t mean that we have to stay there and be mistreated over and over again. There are resources available, and just being aware of what those resources are can be a first step.”

Anyone hoping to learn what their church or other faith-based group can do to help those threatened by domestic violence will have an opportunity to do just that at an upcoming event hosted by the Troup County Domestic Violence Task Force.

“Our next lunch and learn for the domestic violence task force will be about how to help people in the faith community reach out,” said Heather Canizales, who spoke Wednesday.

The date of the lunch and learn is to be determined.

Harmony House is currently in need of donations of cleaning supplies like toilet paper, paper towels, anti-bacterial wipes and anti-bacterial sprays. For more information or to arrange a donation, visit Harmonyhousega.org or call (706) 882-4173.