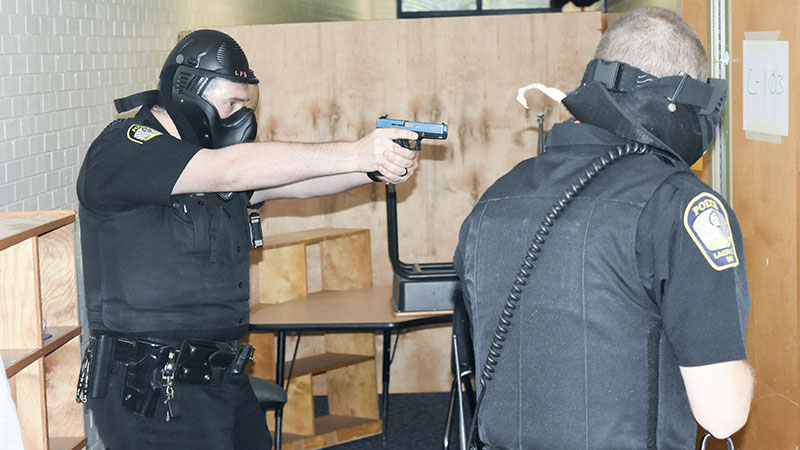 The LaGrange Police Department and other local agencies spent the last few days getting prepared for a scenario they hope never happens in real life.

The LPD, LaGrange Fire Department and other local law enforcement agencies spent Monday through Thursday playing out active threat scenarios, preparing officers in case the unthinkable happens — an active shooter in a public building, such as a school. The training took place at Whitesville Road Elementary School, which is no longer used to hold classes.

Lt. Eric Lohr, who oversees the training for the LPD, said they update their training each year, based on real life scenarios that have taken place in other cities, including the Parkland, Florida, school shooting last year.

“Up until last year, most agencies trained with four or five officers going in. That’s been the mindset,” Lohr said. “But part of training is looking at current events, seeing how those are playing out and learning from those. What we’ve seen over the past three or four years is you’ve got either one or two officers arriving on scene and having to deal with the threat as opposed to waiting for other officers to arrive.”

The LPD trained with teams of one or two officers going into the school. In one scenario, they were directly in contact with the shooter, and in another they had to find the shooter. On Thursday, officers walked down the hallway, checking classrooms and listening to gunshots as they tried to find the active threat.

Lohr said if a scenario played out in a local school with a student resource officer, that officer would become a “team of one.”

“They aren’t waiting for other folks,” he said. “That’s what we’re practicing on the tactical side.”

The LFD was involved so that it could practice administering medical aid to victims.

Lohr said a few years ago medical personnel wouldn’t be in the building until it was completely cleared.

“That can take a very long time, and a person can bleed out in three minutes,” Lohr said.

Now, officers are trained to clear and secure an area so that EMS and firefighters can help victims.

Lohr said that was a new portion of the training, as are tabletop exercises with supervisors, who have a lot to worry about during one of these events, including how to utilize officers from other agencies.

“There’s a lot of things for a supervisor to have to deal with, and that starts from the minute the call comes out,” Lohr said.

Lohr said the LPD has done an overview with TCSS administrators, held stop the bleed training a few weeks ago and completed tabletop exercises with administrators recently as well.

He said they’ve also talked to the school system about fire alarms, which have been used to get students into the hallway in some active shooter events. He said administrators now go do a quick check to see if everything is all clear and check if there is an actual fire.

“We are trying to get people prepared as possible,” Lohr said.