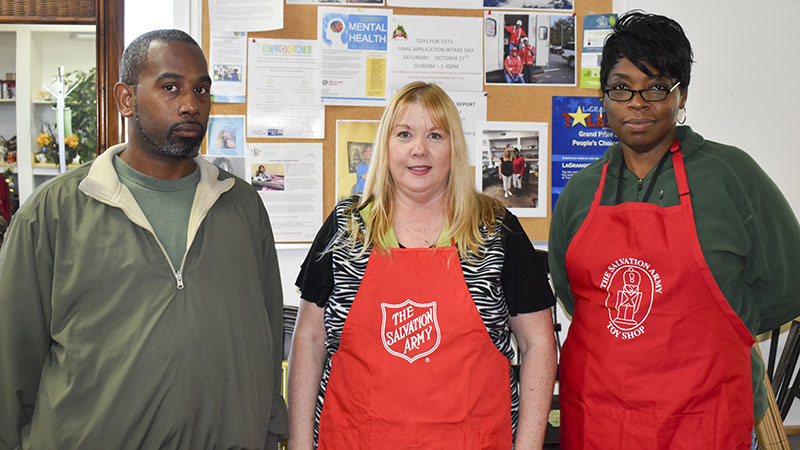 In her short time in Troup County, The Salvation Army’s new service center director, Lisa Martin, said that she has already seen miracles.

Martin took over operations of the local Salvation Army in May. The location switched from a corps-operated thrift store to a director managed, family store and service center this year, and as the center’s first director she has made several changes to The Salvation Army store, including working to make it feel like a store where people can shop and stop to talk.

“It is about letting people understand that God wants that intimate relationship with you,” Martin said. “That is really what the goal of the church is supposed to be is to help people find their place because everybody has a purpose. Everybody has a place.”

Martin said that God led her to Troup County, and while she may not know God’s full plan, she said that she has already seen him at work in her life and the lives of those who visit The Salvation Army.

“It is more than just, ‘we can give you money.’ Anyone can give you money and assistance, but that is not going to help you find who you are and your place,” Martin said. “[Finding your place] is more important because we all need to be validated. We all have that right to be validated, and that is the only way we are going to break down the prejudices and the other issues that we have, unfortunately, that cause discord among people.”

Martin said that she enjoys praying with the people who come to The Salvation Army and has seen even those who she could not offer assistance beyond prayer receive the help they need in more after their first visit.

“This lady that came, we could not help because she did not fit our guidelines, but before she left, I just said to her, ‘If you don’t mind, ma’am, would you let me pray for you?’” Martin said.

“She said OK. What prayer is, is speaking the heart of God into somebody. … In that I said, ‘I believe God wants you to know, he’s opening up a door that you’re not even aware of, but it is for one reason only — because he loves you.’ There can be lots of other reasons, but that is the most important.”

According to Martin, two days later, the woman returned to let her know that she had received more money than she needed to meet her needs.

“I know [now] that this is where the Lord has sent me, and he has sent me to be able to do the most good for people in this community. I just believe that it is not about a job. It is about a calling, and I am seeing the results of it. In the last few weeks, I’ve received numerous reports of people receiving Jesus and being healed because I am a minister as well. That is what I’ve done for 30 years. I have ministered on four continents, mainly women’s ministry.”

Martin said that it was God’s call that brought her to the Troup County area.

“I was invited to speak at a church, and in the doing that — I had confirmation from people — that I was actually to move, so I moved to Alabama,” Martin said. “I drove all the way from Washington state. I’d had my license a month, which is driving on the wrong side of the car — for me — on the wrong side [of the road]. It took four days, but I took it all the way to Alabama, and that has been my home.”

She has been striving to follow God’s call since then and is excited about what The Salvation Army can do for people in Troup County.

“As you can see by the facility, we don’t have a lot of room,” Martin said. “We do need more space. We do need a bigger location because this was a thrift store. Now it has been transitioned into a service center, and to be able to do what I believe we can do here to benefit the community more, we need a bigger space. I’d like to have a multi-purpose room for other non-profits to come and utilize as well.”

In her time in Troup County, she said that she has been impressed by the community and has partnered with other groups to make a difference.

According to information from Martin, Troup High School donated 18,000 cans of food. Rosemont Elementary School is hosting a canned food drive. That food doesn’t just stay at The Salvation Army though. Martin said that 19 barrels of can food were donated to Ark Refuge Ministries by The Salvation Army. It also donated 840 cans of food to Maidee Smith Memorial Day Care Center. She said The Salvation Army currently needs a truck driver to help transport donations and is looking for more local board members.

“This is a very giving community,” Martin said. “That has been what I have experienced since I have been here, and the people of Troup County are wonderful people. The organizations are wonderful, and they do really sincerely want to help people.”

The Salvation Army will host a Toys for Tots intake day on Saturday from 10 a.m. to 1:30 p.m. at 202 Church Street. Assistance is limited to the first 200 children who sign up.