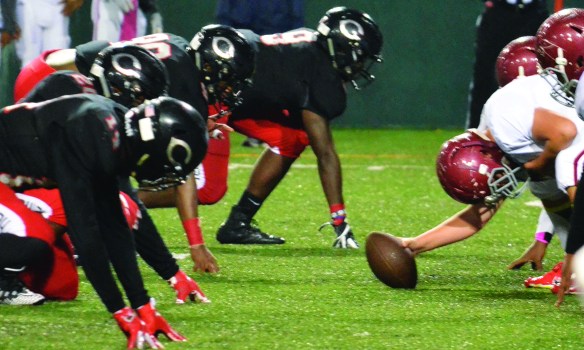 The Callaway Cavaliers know they’re going to be in the state playoffs next week.

Callaway’s playoff fate will be determined by Friday’s showdown between Bremen and Heard County.

If Bremen wins, there will be a three-way tie for the region’s top spot between Bremen, Callaway and Heard County.

Based on the tie-breaker the region is using, Bremen would be the number one seed, Heard County would be seeded second, and Callaway would be the third seed.

In that scenario, Callaway would be on the on the road for the opening round of the state playoffs.

If Heard County beats Bremen, it would be the only unbeaten team in the region so it would win the title and secure the top seed.

Callaway would be the number two seed and it would host a playoff game, while Bremen would be seeded third.

Callaway could have wrapped up the region title and the top seed with a win over Heard County, but it lost a heart-breaker.

Callaway was ahead 10-0 in the fourth quarter, but Heard County rallied for a 13-10 win.

As painful as that loss was, Callaway has remained focused on the big picture.

The region’s fourth and final playoff spot will be determined this week as well, with Jordan, Spencer and Lamar County still in the picture.

Spencer is in the driver’s seat with a 2-3 region record, while Jordan and Lamar County are a game back at 1-4.

Spencer will secure the playoff spot with a win over Jordan on Friday.