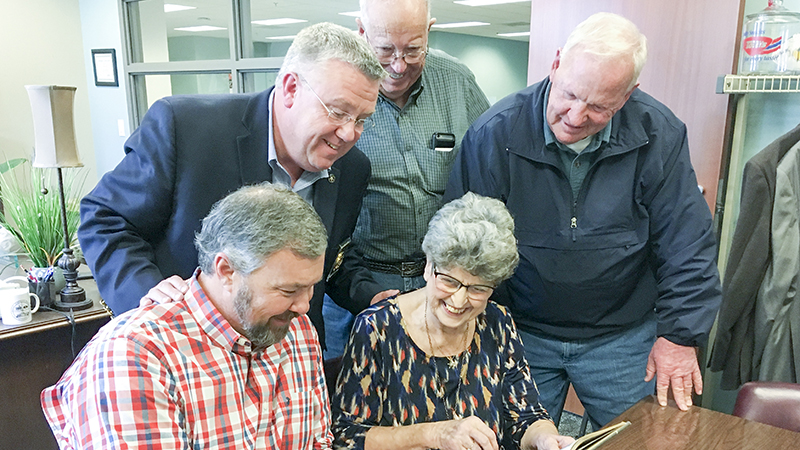 Shane Frailey, James Woodruff, Ellis Cadenhead, Seba Lanier and James Stogner look at an old Troup High School yearbook in Frailey’s office. The alumni plan to walk through the building that formerly served as THS on Nov. 10. --Alicia B. Hill

Whitesville Road Elementary School held its last class in May, and now, with the future of the facility in question, alumni who attended the school when it was used as the original Troup High School hope to tour the building at least one more time.

From 1955 until 1987, the school on Whitesville Road was Troup High School, and in that time, thousands of students walked those halls, including some of the Troup High School Alumni Association’s most active members. Some of those members sat down to reminisce about the old Troup High School building last week.

“We started in spring ‘55,” said James Stogner, a local businessman. “We went half a year to Rosemont.”

At the time, there were six county schools in Troup County, and students attended the same school from eighth grade until graduation.

“We were all small [classes],” said Seba Lanier, the oldest alumni active in the association. “My class had 14 in it at Rosemont. We were all small schools, but then we went up to the big world [at Troup High School].”

Lanier said that there were 56 people in her graduating class at Troup High School. Her class was the first to graduate following a full year at the newly constructed school, and at the new school, Lanier and her classmates were able to attend classes that had not been available to them previously.

“When we went up there, we had all these vocational classes — home economics classes — just a lot of different [types of classes],” Lanier said. “It was quite a change when we went out there with all those people.”

“The first time we played LaGrange High in football, we made a banner that said ‘Country boys come to town,’” County Commissioner Ellis Cadenhead said.

The cross-town rivalry featured many friendly jabs back and forth.

“Every year we played, [LaGrange High School students] dressed up in suits, and we put on our boots and went to town,” Lanier said.

However, during the first few years, Troup fans would have found themselves cheering on the Troupers instead of the Tigers.

“We voted on it in ’58, and we changed it to the Troup High Tigers,” Stogner said. “And we left off county. It used to be Troup County High School. Then we left off ‘county’ and just put ‘high school,’ THS.”

By the 1980s, graduating classes had grown significantly, and the school system prepared to build the facility now known as Troup High School.

“I believe that when I graduated, it was about 200 people,” Sheriff James Woodruff said.

In spring of 1987, the facility on Whitesville Road held its last high school class.

“I was the first graduating class out of the new high school that is there now,” Tax Commissioner Shane Frailey said. “We started in ’87, but we graduated in ’88.”

That year, THS combined with West Point High School in the new building.

Now, the Troup High Alumni Association makes a point of being involved in its alma mater by supporting students and teachers with funds raised by an annual “Sock Hops” concert.

“That was just a method that I felt like we as a group could give back to the school in some form or fashion, even through the scholarship,” Cadenhead said. “We got about six or seven people together to begin with [in 2011].”

The alumni association has helped fund the sign in front of THS, scholarships, events for teachers and students and sponsored a student attending the Rose Bowl.

The Troup High Alumni Association plans to walk through the school on Saturday, Nov. 10 from 10 a.m. to noon. All Troup High alumni are invited to attend.

LAM howls at the moon