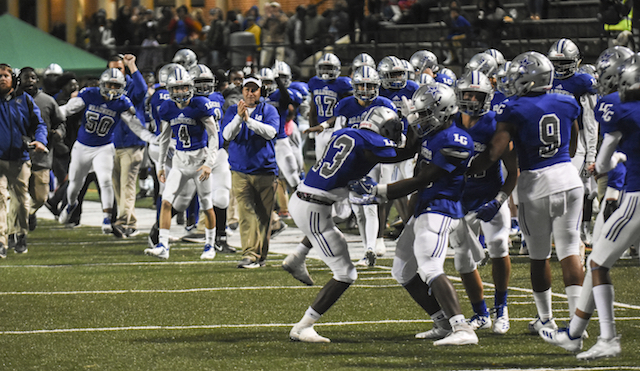 Dylan Norvell celebrates with his teammates after scoring the go-ahead touchdown in LaGrange's 16-14 win on Friday night, while head coach Chuck Gibbs shows his support in the background. - Daniel Evans

LAGRANGE – In dramatic fashion on homecoming night, the LaGrange Grangers pulled out their second victory of the 2018 football season, ending the season on a positive note. After falling behind early to the visiting Shaw Raiders, LaGrange came back from an 11-point third quarter deficit to eek out a 16-14 win, sending the seniors off on a high note.

“It was great to see the seniors come out after halftime and rally, they didn’t get down, they didn’t quit,” an ice-bath soaked LaGrange head coach Chuck Gibbs said after the game. “We gave up a fumble recovery for a touchdown, had a blocked punt, we’ve been getting in our own way all year. This is a grind, but hard work pays off. This is a great way to end it, on homecoming and senior night for these kids, it’s all about them.”

While the ending was storybook, elements of the first half were anything but. The game started positively enough for the Grangers, as Ben Ivey connected on a 33-yard field goal on LaGrange’s opening drive of the game to give the home team an early 3-0 win. Shaw quickly matched LaGrange’s effort, however, capitalizing on a short field via a Granger fumble later in the quarter which led to a score and a 7-3 lead for the visitors.

The rest of the first half saw a stout LaGrange defensive effort, but an offense that was repeatedly stalled by self-inflicted penalties and the Grangers went into the half trailing 7-3.

LaGrange took possession first out of the half and began to move the chains before disaster struck. Granger quarterback Charles Crawford dropped back to pass from the Shaw 35-yard line, but before he could get rid of the football, Shaw sophomore Javonte McGill stripped Crawford from behind, scooped up the loose ball and galloped 65 yards for a Raider touchdown, which gave the Raiders a 14-3 lead early in the third quarter.

To LaGrange’s credit, the unfortunate turn of events did not break its spirit. After the Shaw scoop-and-score, the Grangers put together their most impressive offensive drive of the night, as well as one of their better drives of the season. A nine-play, 79-yard drive ensued that was capped by a neat 44-yard bubble screen from Crawford to Jakoby Smith, who caught the ball on the right hash before cutting entirely across the field and crossing the plane of the end zone in the left corner. The score brought the game to 14-10 in favor of Shaw.

More good favor struck LaGrange on the ensuing Raiders’ drive, as junior defensive tackle Xavious Potts forced a fumble, setting LaGrange up with great field position on the Shaw 17. After a Smith run got the ball down near the goal line, Crawford took a third down snap, rolled to his left and zipped a well-placed ball to Dylan Norvell for another score. The extra point was missed, but LaGrange held a narrow 16-14 advantage as a result.

LaGrange and Shaw traded punts into the fourth quarter before LaGrange sophomore Andraka Martin picked off an errant Shaw pass midway through the quarter that looked to seal the game. Leaning on Smith as a bell-cow back, LaGrange worked the ball inside the Shaw 20-yard line and the clock to less than two minutes. However, a fumble gave the Raiders one last chance to ruin the evening.

But this was to be the Grangers night. A promising drive was snuffed out by back-to-back sacks to end the game, the final of which was delivered by Jonathan Sutton. Seniors then doused Gibbs in an ice bath, and the celebration was on.

LaGrange ended the season with a 2-8 record this year.