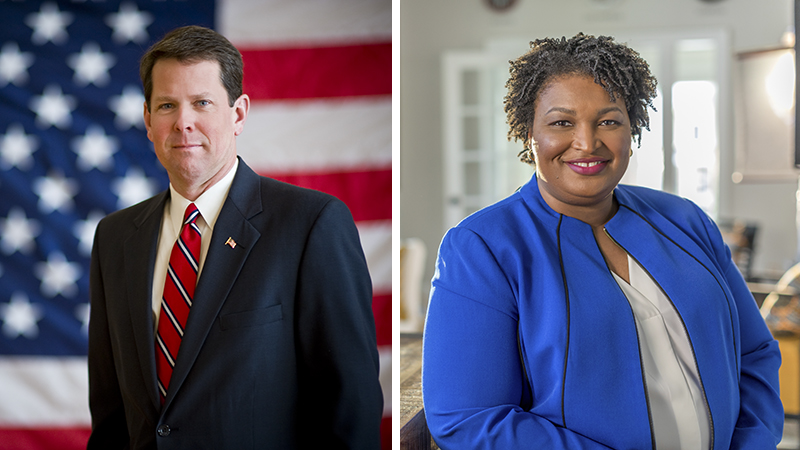 ATLANTA (AP) — As of press time on Tuesday night, the Georgia governor’s race between Republican Brian Kemp and Democrat Stacey Abrams was too close to call. Kemp had a small lead, but votes in metro Atlanta were still uncounted and about one tenth of total votes were still not totaled in.

Adding to the Election Day drama, widespread reports of technical malfunctions and long lines at polling stations came in from across the state, with some voters reporting waits of up to three hours to cast ballots.

In Troup County, Kemp won 14,405 to Abram’s 9,098, or 61 percent to 39 percent. He won nine of the 15 precincts, but lost decisively in five of the six he didn’t win. All of the 15 precincts except for the Highland precinct, where voters cast ballots at Troup County High School, were decided by 200 or more votes, and most were decided by much more.

A state judge ordered three precincts in suburban Gwinnett County — a populous swing county — to extend their polling hours, one of them as late as 9:25 p.m. An order issued in Fulton County Superior Court says three polling places must stay open late — two until 10 p.m.

The elections chief wasn’t immune to the difficulties: When Kemp went to cast his ballot, he had an issue with his voter card, but it was fixed quickly. He walked by reporters and said: “Take Two.”

In Cobb County, just outside Atlanta, Nicole Whatley planned to vote for Abrams, partly because “of this whole social divisiveness that’s been going on,” she said, as she stood in line to vote outside a library in a cold rain Tuesday morning.

Whatley, 33, said she didn’t appreciate how Kemp has adopted Trump’s rhetoric on immigration.

“Kemp tried to play that Trump card to get where he’s at,” she said, adding that Abrams, by contrast, highlighted unity. “Her campaign spoke about partisanship and bringing people back together,” Whatley said.

Her husband Lance Whatley, a 29-year-old software engineer, was leaning toward voting for Kemp as he waited. “It might be a game-time decision for me when I get in the voting booth,” he said.

Kemp, a 54-year-old businessman and veteran secretary of state is vying to maintain the GOP’s hold on a state that is nearing presidential battleground status courtesy of its growth and diversity. Republicans have won every Georgia governor’s race since 2002.

Ballot access and election integrity flared up in the final weekend after a private citizen alerted the Georgia Democratic Party and a private attorney of vulnerability in the online voter database Kemp that oversees in his current job as secretary of state. Those private communications ended up with Kemp announcing, without providing any evidence, that he was launching an investigation into Georgia Democrats for “possible cybercrimes.”

Kemp pushed back Monday against concerns that his call for an investigation is politically motivated.

But Abrams would have none of that, declaring Kemp a “bald-faced liar” intent on deflecting attention from security problems with his system.

Nonprofit Protect Democracy said in a news release that it filed a lawsuit Tuesday seeking to keep Kemp from being involved in counting votes, certifying results or any runoff or recount. The lawsuit says that Kemp presiding over an election in which he is a candidate “violates a basic notion of fairness.” Secretary of state’s office spokeswoman Candice Broce called the lawsuit a “twelfth-hour stunt.”

Both nominees frame the election as no less than a battle for Georgia’s soul, a contest so intense that early voting has approached the overall number of ballots cast in the governor’s race four years ago. Georgia law requires a majority to win, so the presence of a Libertarian on the ballot could yield a Dec. 4 runoff.

“I’ve never seen a time where the state of Georgia had more at stake than we do in this contest,” Kemp told supporters at one of his final campaign stops.

In the closing days, Kemp basked in President Donald Trump’s glow, after a Sunday rally that drew thousands of boisterous Republicans to central Georgia to see Trump deplane from Air Force One.

Abrams, meanwhile, continued as she has throughout her campaign noting the potential historical significance but arguing the contest should be about more.

The Georgia outcome is among the most closely watched of any midterm contest for reasons beyond Abrams’ race and gender. Democrats are expected to pick up several governor’s seats across the country, particularly in the Midwest region that helped propel Trump to the White House in 2016. But flipping what has been a GOP stronghold like Georgia would signal a potential meaningful shift in the electorate and open up a new battleground ahead of 2020.