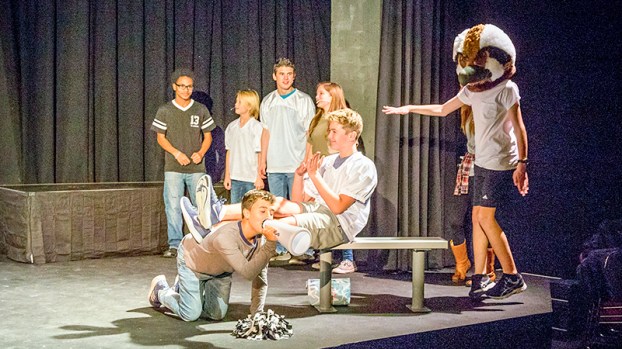 The curtain rose on the Lafayette Theatre Academy’s production of “13 the Musical” on Thursday night, with young performers singing along to the Broadway famous score and telling the story of growing up, fitting in and standing out.

This performance of “13” is made especially notable because the actors from LTA are so close to the ages of their characters.

“One thing that is unique about this show for this age is that the content is more mature and appropriate for middle school — because that is the time of life where you are changing from a child to an adult and trying to find your way in a new part of life,” said Amy McDow, the director. “Our cast is right there in the middle of these tween years, and I think it really resonated with them.”

For some of the actors, the combination of age and outlook meant that the characters they played were particularly relatable.

“He is just trying to fit in with everybody and find out who his true friends are and trying to be popular,” said Walker Kemp, who is playing the lead role of Evan. “It is somebody who I feel like everybody can relate to.”

Kemp has previously performed with LTA in productions of” The Last Queen of Wonderland”, “Disney’s Lion King Jr.” and “Charlotte’s Web.”

Meanwhile, Danielle Kemper, who plays Kendra, said that she couldn’t relate to her character at all, but she still had a lot of fun preparing for the musical.

“We have had a lot of fun,” Kemper said.

The actors said even preparing for the daunting musical numbers was enjoyable.

“I thought [practice] was going to be not as fun, but it has been just fun,” said Garner Dorminy, who plays Archie.

This is the second time “13 the Musical” has been performed locally, with both instances under McDow’s direction.

“It is actually one of my very favorite musicals,” McDow said. “It is the second time I have directed it, and the first time was in West Point. The overall experience for the cast and crew was phenomenal. We just had a fantastic time throughout the entire production, and the next generation of actors and actresses that I work with wanted to do this production. They specifically asked for it, and because I love it so much, I agreed.”

McDow said that coming of age musical is something that audiences are likely to relate to just as much as the performers themselves.

“The musical score is dynamic and is something that really appeals to all of the audience members,” McDow said.

“It talks about youth in a light-hearted manner, but also has a lot of really valuable truths that lie underneath. I think as the kids grow up, the parents have to too, and this show illuminates that need for parents to recognize that kids are in the middle of that transition period where they are becoming adults. They make mistakes, and they make choices that may not always be exactly what their parents want them to, but it is all a part of growing up.”

The show is a picnic event, and dinner from Marco’s Pizza is available to preorder.

HOGANSVILLE — It was pouring rain outside, but that didn’t stop American Legion Post 152 from holding its annual Veterans... read more