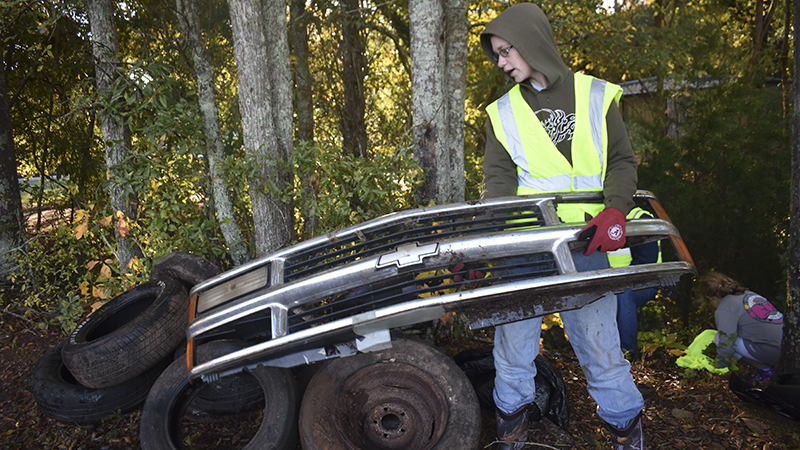 Volunteers found an illegal dumping site last weekend during the November Leaving LaGrange Better Than We Found It. Since the clean-up day, city workers have returned to clean out additional items found at the illegal dump location. (Contributed)

“We usually don’t tackle illegal dumping grounds on our regular, monthly litter pick-ups, but we decided that this was along our way, and we were going to do the best we could to leave LaGrange better than we found it,” said Katie Van Schoor, the City of LaGrange marketing and communications manager. “We all jumped into the ravine, and we cleaned up.”

The volunteers uncovered more than 70 tires, a few dressers, toilet bowls and various car parts. More than 100 tires were later found buried under a mound of kudzu when crews went back to the site after it was discovered. Some tires had been there for a long time, while others appeared to have never been used.

“It was in bad shape,” Van Schoor said. “We do feel like we cleaned up a little bit, but we’re just hoping that people do not do that again.”

The LaGrange city ordinance states that a person caught dumping illegally could receive up to a $1,000 fine and up to six months in jail. The LaGrange Police Department did not know who has been contributing to this dumping ground as of Friday, but they have opened an investigation.

If any member of the community discovers an illegal dumping site on city property, they should call the City of LaGrange to let city staff know about the issue.

Anyone looking to get involved in cleaning up the town can join City of LaGrange employees, the Kiwanis Club, Youth Council members and LaGrange Academy students in picking up litter along Vernon Street and West Point Road on Dec. 1 at the next monthly cleanup event.

“We just want people to stop dumping illegally and take pride in our community, and that’s why we do these monthly pick-ups,” Van Schoor said. “We just want everybody to get involved.”