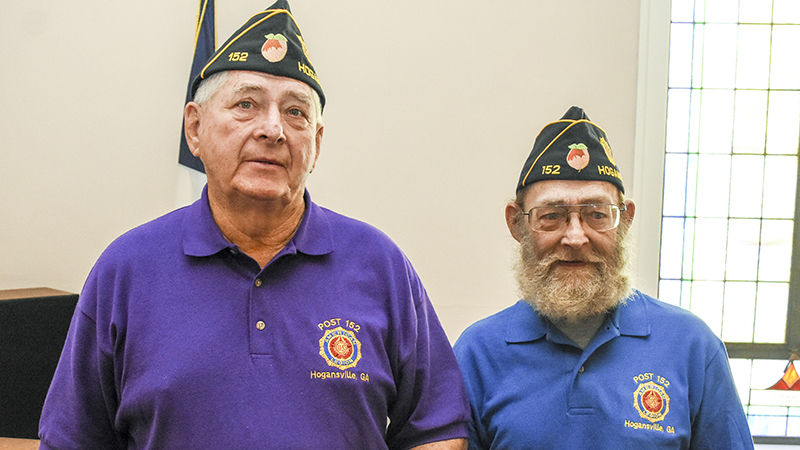 Gary and Johnny Cason were named veterans of the year in Hogansville on Friday. (Daniel Evans | Daily News)

HOGANSVILLE — It was pouring rain outside, but that didn’t stop American Legion Post 152 from holding its annual Veterans Day ceremony Friday in downtown Hogansville.

The post moved the ceremony inside at Ebenezer Presbyterian Church, which sits across the street from Calvin Hipp Park in Hogansville, where the ceremony was originally scheduled to be held.

“He applied for brother duty, and we were stationed together in the same squadron,” Gary said.

Both recommended younger military veterans get involved with the post.

“The hardest part is getting new, younger members,” Gary said.

The post also took time to honor Frances Robinson, who passed away last year. Robinson served as a medical tech in the Women’s Army Corps in World War II. The City of Hogansville has been trying to find the right way to honor Robinson, and will place a monument in her honor downtown.

Earlier this year, the council decided against naming basketball courts in her honor, choosing to find another way to recognize her. Mayor Pro Tem Theresa Strickland read a proclamation declaring Nov. 11 at Frances Robinson Day in Hogansville.

Esteller Adams-Sapp, Retired Sgt. First Class in the U.S. Army, was the event’s guest speaker. She currently works for the Department of Veterans Affairs.

“The service members we honor today come from all walks of life,” she said. “They possessed the courage, determination, selfishness, dedication to duty and integrity … they were called to be part of something bigger than themselves. They were ordinary people who responded to extraordinary things. They rose to the nation’s call because they wanted to protect our nation.”