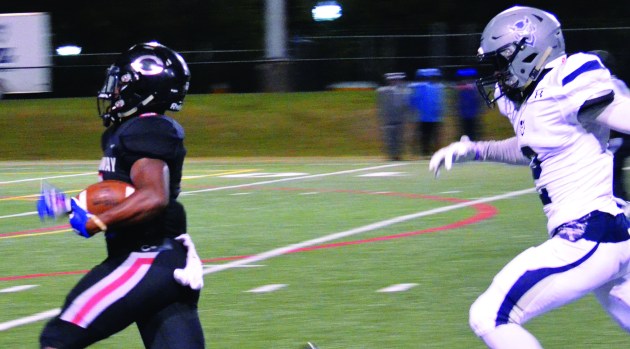 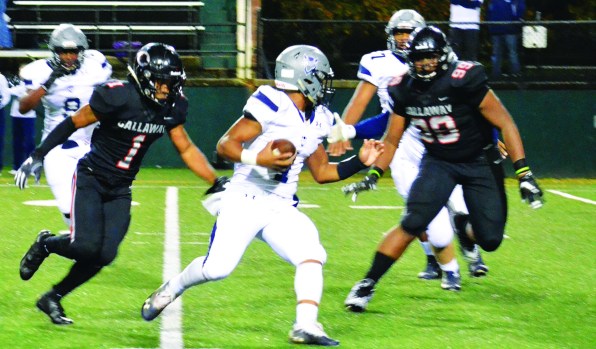 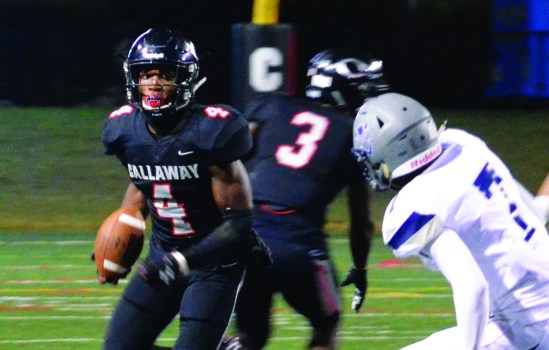 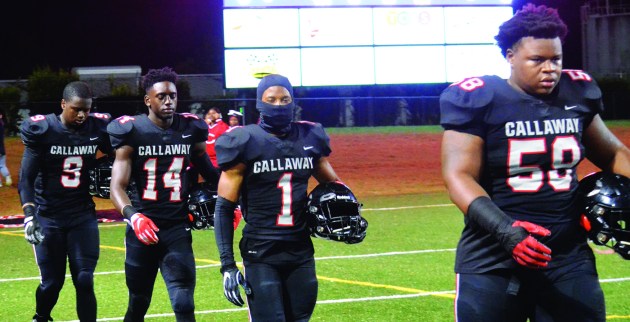 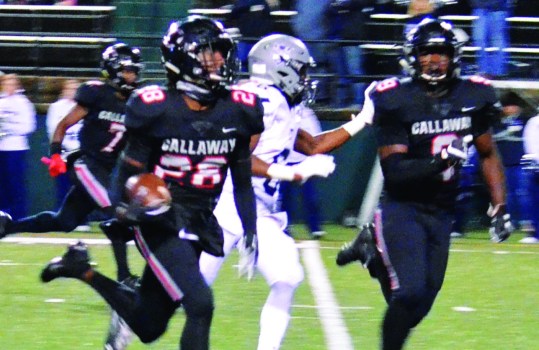 They needed someone to make a play.

The Callaway Cavaliers found themselves in a tie ballgame late in the third quarter of Friday’s state-playoff showdown with Elbert County, and momentum wasn’t going their way.

Elbert County had fought back from a 14-0 deficit in the first half to pull even early in the third quarter, and Callaway’s first three second-half possessions ended with two lost fumbles and a punt.

As the third quarter wound down, Callaway had the ball on its own 25-yard line, and senior Qua Hines entered the game.

Hines took a handoff from quarterback Demetrius Coleman, and he popped to the outside and found himself near the left sideline with nothing but green turf between him and the end zone.

Elbert County’s defenders tried to chase Hines down, but they had no chance.

Moments after the clock hit zero signaling the end of the quarter, Hines crossed the goal line for a 75-yard touchdown run to give the Cavaliers a lead they wouldn’t relinquish.

Callaway added another touchdown in the fourth quarter on Cartavious “Tank” Bigsby’s third scoring run of the game, and it held on for a 27-14 victory.

Callaway will visit defending state champion Hapeville-Charter next Friday in the second round of the state playoffs.

“I was proud of our team,” Callaway head coach Pete Wiggins said. “We fought hard throughout the night. Elbert County’s got a good team. Again, I’m proud of the preparation, and there’s a lot of good take-aways from it.”

Until Hines’ game-changing play, it looked as though Elbert County had a legitimate chance to come into Callaway Stadium and walk away with the win.

Hines, one of 26 seniors on the roster, did not want to see his high-school football career end like that.

“I had to make a play for my team, help turn it around,” Hines said.

As Hines raced down the field, he said “I just looked at the jumbo screen, and I knew I could get in the end zone to help my team.”

Wiggins, Callaway’s head coach since 2005, said “it was a great moment for Qua. He came through with a big run, and really swung the momentum. I was really proud of him and his effort. The guys up front did a good job.”

As critical as that play was, the game was a long way from over.

Elbert County hit on a big pass play to get to the Callaway 7-yard line early in the fourth quarter, and it was in position to possibly come away with the game-tying touchdown.

D.J. Ardister threw a fade pass in the left side of the end zone, and Shephard went up and took the ball away from the intended receiver for the interception.

“I owed my team,” Shephard said. “I gave up a touchdown earlier, so I feel like that wasn’t just a pick for me, it was a pick for them.”

The Cavaliers then drove 80 yards for the touchdown, with Bigsby finding the end zone on a 23-yard scoring run to make it a 27-14 game with 7:53 to play.

Elbert County’s hopes were snuffed out when Shephard came through with his second interception of the fourth quarter.

Shephard returned the interception for a touchdown, but the score was negated by a penalty.

The Cavaliers still had the ball, though, and they picked up two first downs before punting with less than two minutes remaining.

Elbert County drove inside Callaway territory before time ran out.

After Elbert County went three-and-out on its first possession, Callaway got the ball at its own 26-yard line.

Following an incomplete pass on first down, Bigsby took a handoff from Coleman, and he sprinted 74 yards down the left sideline for the touchdown.

Hunter Williamson made the first of three extra points, and Callaway led 7-0.

Callaway padded its lead in the second quarter, going 39 yards in four plays for the touchdown.

Bigsby capped that short drive with a 5-yard scoring run, and Callaway led 14-0 with 7:10 left in the half.

Elbert County got the ball for the final time in the half with a little more than three minutes remaining, and that was just enough time to put some points on the board.

With seven seconds left in the half, Ardister threw a 6-yard touchdown pass to tight end Daniel Lavender, cutting Callaway’s lead to 14-7, which was the score at the break.

Callaway’s first possession of the second half ended with a lost fumble, and Elbert County promptly went 59 yards for the tying touchdown, with Ardister tossing an 11-yard scoring pass to Metrius Fleming.

Callaway lost another fumble on its next possession, and Elbert County had the ball on the Cavaliers’ 44-yard line.

Callaway’s defense stood firm, though, with Jacob Freeman making a terrific open-field tackle on a complete pass to force a punt.

Callaway drove into Elbert County territory before a fourth-down play failed, but the defense rose to the challenge again to force another punt.

The Cavaliers took over at their own 13-yard line, and following an 11-yard run by Bigsby, Hines changed the complexion of the game with his huge touchdown.

The Cavaliers had the lead once again, and this time they didn’t give it up.