Troup High alumni remember where they came from 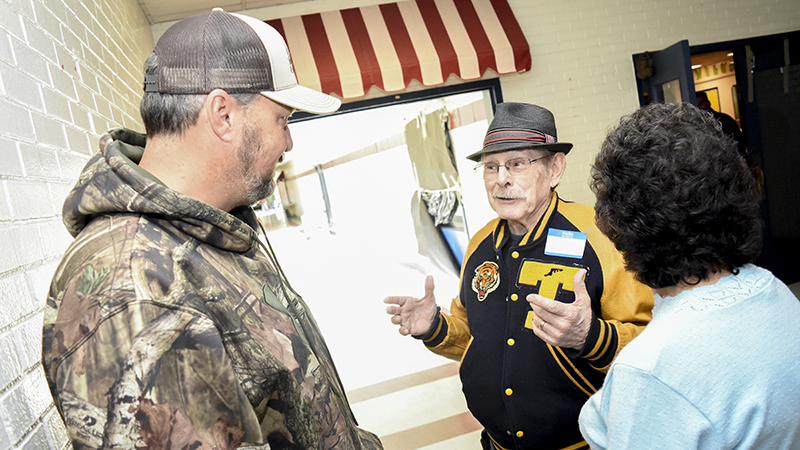 Shane Frailey talks Billy Roberts, from the class of 1963, on Saturday. Frailey estimated that more than 150 alumni walked through the former Troup High School at the event. (Daniel Evans | Daily News)

Troup County High School alumni took a trip down memory lane on Saturday morning, as they gathered to tour the building where they went to school many years ago.

Troup High School was originally housed in a building most recently used as Whitesville Road Elementary School, which was phased out by the Troup County School System in May. The day was organized by the Troup High School Alumni Association, and gave former students the opportunity to see the inside of the school again and to reminisce about their high school years.

“Almost every room you pass has a memory,” said Don Henderson, class of 1967. “I can tell where my locker used to be, where different teachers taught and what rooms they were and areas where we used to gather.”

Many alumni wore old letterman jackets and others put on THS t-shirts for the special day. Former students had a chance to go throughout the building, seeing their old classrooms. Old yearbooks were available on tables at the front of the building, and a lot of the people in attendance spent time finding their photo inside.

Shane Frailey, who helps lead the alumni association, estimated 150 people had come in to tour the building by 10:30 a.m. Saturday, and there was still another 90 minutes left to go.

While some reminisced about classes, others were thankful for the friendships and relationships formed at THS.  Jack and Shirley Morman have been married for 52 years, all starting after she was named homecoming queen her senior year. They graduated in 1965.

They said they didn’t really know each other before that moment, but Jack said he knew that was the woman he wanted to marry.

“He worried me to death. Followed me to every class,” Shirley said while laughing. “We were married two years later.”

Students weren’t the only ones who returned for the tour. Former educators also came back to see the building.

“It’s really, really fun to see the students again, a lot of the ones I taught,” said Helen Freeman Henry, who taught at Troup High School from 1959-1961. “I’ve really enjoyed seeing them. We have happy memories.”

The Troup County School Board has not announced plans for the building at this time.