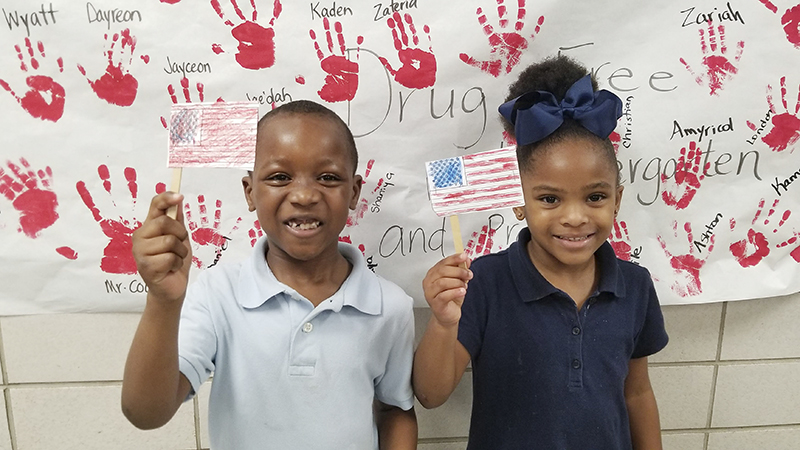 Close to 20 military veterans joined Berta Weathersbee Elementary students and staff as they pulled out the red carpet and brightly decorated flags to honor the men and women who served this country. Before the ceremony began in the school auditorium, student leaders and staff decorated the hallways and doorways in red, white and blue fanfare.

“I am honored to be celebrated by the students of this school,” John Piecuch, retired 1st Lt. from the U.S. Army Corps of Engineers, said. “This was not only for me, it was for the great men and women who have fought to make this country great. I am glad to be here to see the time and effort these great students and staff have put into this event.”

The veterans, from all branches of the armed services, saluted the flag and stood for the singing of the National Anthem.

They also enjoyed the Berta Steppers, who incorporated themed steps and words into their routine. Berta staff members Stephanie Walker, Dalecia Williams and Amy Combs sang the well-known “Boogie Woogie Bugle Boy” as a thank you before the guest speaker came to the podium.

Sandra Brownlee was the highlight as a military veteran and guest speaker for the program. Her theme centered on heroes. She enthused the young learners and got them involved by asking them to share what they knew about the military and superheroes.

Chants and shouts came from around the auditorium as Brownlee charged the attendees to become active members of the community and be proud of the country that they represent.

To end the program, all veterans in attendance were called to the stage while their military branch, rank and achievements were cited. There were Purple Heart recipients, Bronze Star Medal winners and military war veterans as far back as the Vietnam War who came to receive their handmade gifts from the students.