Stark Mill listed as a place in peril 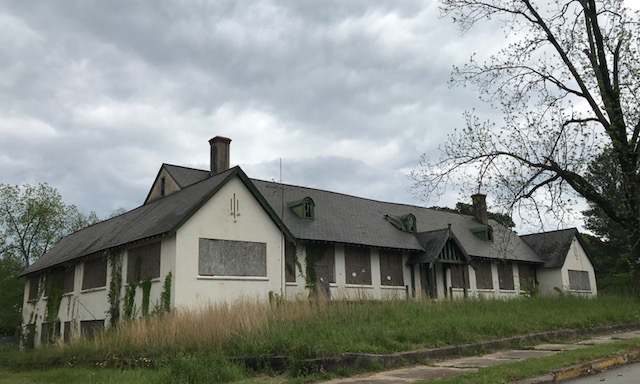 (The Georgia Trust for Historic Preservation)

HOGANSVILLE — A building in Hogansville has been named to the Georgia Trust for Historic Preservation’s 10 Places in Peril list.

The Stark Mill Community Building in Hogansville, which was built in 1917, was on this year’s list. The building was originally constructed to serve as a hub for the residents of the Stark Textile Mill community and included a gymnasium and auditorium, an indoor swimming pool and bowling alley, according to the Georgia Trust for Historic Preservation.

The list is released annually to raise awareness for historic structures with uncertain futures due to poor condition, neglect, lack of maintenance or other issues.  This was the 14th year the list has been released.

“It’s been vacant for a long time, and it’s going to be a tough building to save, but it’s such a beautiful building and has so much historic character that the Georgia Trust is going to use its contacts across the state to reach out to some developers and try to find the developer who might take on this building as a rehab project,” said Mark C. McDonald, president and CEO of the Georgia Trust for Historic Preservation.

McDonald said there were 23 total sites nominated for the list this year. Structures listed on the 13 previous Places in Peril lists are mostly still standing. McDonald said only 15 percent of the sites previously listed are no longer in existence. The remaining 85 percent are either still standing, in a step of preservation or completely renovated.

“Historic buildings are what define us as a culture,” McDonald said. “They help distinguish one community from another and it’s what makes Georgia special. Georgia’s history is best reflected in its historic buildings. That’s how we tell our stories. If we lose these historic buildings, we’ve really lost a link to the past.”

Mayor Bill Stankiewicz said without a sizeable investment the building is not salvageable.

“They made a tragic mistake. It’s not in peril, it’s gone,” Stankiewicz said. “It’s beyond repair. We tried to save it years ago. I guess nothing is beyond repair — if you had $10 million, you could restore it to its original condition. The roof is caved in. They can say it is in peril, but it’s beyond in peril.”

Stankiewicz said at one time the City of Hogansville considered the Stark Mill Community Building as a possible site for the new library.

“We brought in engineers and architects, and they said not only can you not bring a library here, but this building needs to come down,” Stankiewicz said.

According to Troup County Property Records, the building is currently owned by Circle of Reflection Enterprise and the co-owners are listed as Helen Flournoy Bell and Helberth Quimbayo.