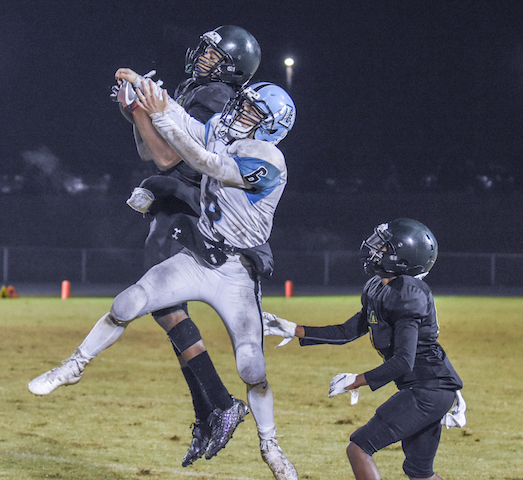 LAGRANGE – After advancing to the Georgia Independent Christian Athletic Association’s 11-man Class A state championship game in thrilling fashion one week ago, the Lafayette Christian School Cougars were unable to cap the season in storybook fashion, falling at home to Life Christian Academy by a final of 44-0 in the state title game.

Lafayette Christian, playing 11-man football for the first time this season after spending a decade at the 8-man level, squeaked past Cherokee Christian by a 19-18 final a week ago to reach the title game, ending that matchup on a 13-0 run to seal the win. The Cougars were unable to recapture that same magic on Friday night, however, as Life Christian jumped on the board early and often.

While the final score signals a runaway affair, the first half was anything but, as the Lafayette Christian defense held its own. Life Christian was the repeated beneficiary of fortunate field position, as special teams’ woes haunted the Cougars early in the form of two poor punts, one of which was partially blocked. The Hawks scored twice in the first half, facing a short field each time, on runs of three and five yards and took a 12-0 lead into the half.

“I thought, coming out of the first half, 12-0 was a good outcome,” Lafayette Christian head coach Nate Shaw said after the game. “They were just able to execute some plays in the second half and break big plays on us.”

Coming out of the half, Life Christian broke the game open. Shakym Bradley took a handoff from Chris Coleman on the first play from scrimmage of the second half and scampered 55 yards untouched for a score. On the ensuing Cougar possession, Jacquez Milam made an athletic play at the line of scrimmage, intercepting a screen pass attempt and promptly returning the offering for a touchdown. In less than a minute of game action in the third quarter, Life Christian had extended its lead to 26-0, putting the game effectively out of reach.

The Cougar offense, adept at playing smash mouth, grind-it-out football, was never able to establish any rhythm on offense. Senior Landon Whitley, along with sophomore Cason Firth, orchestrated what little offensive life Lafayette Christian was able to muster, but the Life Christian defensive line and linebacking corps were the unsung difference makers in the game, as both units were consistently in the Cougar backfield moments after the snap, bottling up the Cougar offense.

“We knew they were experienced, we knew they had a lot of senior leadership, in high school football that’s really everything,” Shaw said. “They were the better team tonight.”

While the season did not end on the high note the Cougars had hoped, it is evident their transition from the 8-man game to the 11-man game was a success.

“There’s no shame in the result of our season, the program is in good hands,” Shaw said. “We were proud to be in the 8-man division, but the result of our transition to 11-man lets us know that you can teach running, blocking, tackling and have success regardless of how many guys are on the field. I think that speaks to the type of program we have tried to build, hopefully it will carry over into the future.”