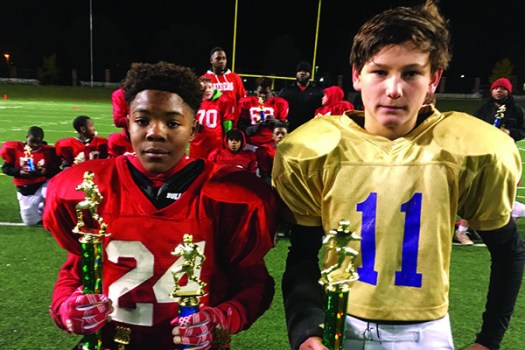 It was a game of big plays.

The Raiders and Dr. John Vollenweider Outlaws combined for three touchdowns that covered at least 50 yards on a bitterly cold evening at Callaway Stadium as the two teams played for 11-12-year-old championship.

Two of those long touchdowns belonged to the Raiders, who outlasted the Outlaws 13-10 to win the Textile Bowl.

With 4:30 left in the game, quarterback Malachi Fannin took off on a 67-yard touchdown run to give the Raiders the three-point lead.

After the Outlaws turned it over on downs, Fannin had a 15-yard first-down run to clinch the victory, and the celebration was on.

“I’m very proud,” Raiders’ head coach Markel Adams said. “From day one, I told them just to come out here and work hard, and that’s what they did. They bought into what I said. I love ‘em.”

It was a heart-breaking conclusion to a special season for the Outlaws, who came into the championship game with a perfect record.

While the season didn’t end with a title, head coach Matt Napier felt the season will serve his players well as they move forward in the game.

“When you commit to something, and you work hard, and you spend time working your tail off and you find success in it, it’s something to be proud of,” Napier said. “You can really tell about these kids’ heart and character when they put it all in, and they truly care about it. The exciting thing is these kids are going to keep playing ball. You’re talking about future stars in Troup County. We’ll all be keeping up with them. It’s just exciting.”

The Outlaws struck first, with Kavius Leonard ripping off a 59-yard touchdown run moments into the game.

The Raiders answered later in the quarter, with Fannin hooking up with Curtis Cameron for a 50-yard touchdown.

Cameron caught the screen pass, and he was off to the races for the touchdown.

The conversion attempt was unsuccessful, so the Raiders trailed 8-6.

In the second quarter, the Outlaws were on the move when Curtis Cameron made back-to-back tackles for loss to force a fourth-and-long.

Napier completed a 14-yard pass to Jardon Stringer, but that wasn’t enough for the first down, and the Raiders took over at their own 10-yard line.

A fumble on first down knocked the Raiders all the way back to their 1-yard line.

On the next play, the Raiders fumbled again and recovered the ball in the end zone, which gave the Outlaws a 10-6 lead after they were awarded two points for the safety.

In the fourth quarter the Outlaws were driving with a chance to run some time off the clock, but they lost a fumble at the Raiders’ 33-yard line.

Two plays later, Fannin got loose and scored on a 67-yard run, and the Raiders had their first lead of the game.

Fannin then completed a pass to Cameron for the two-point conversion, and the Raiders led 13-10 with 4:30 to play.

The Outlaws were unable to answer, and it was the Raiders celebrating the dramatic win.

OF NOTE: For more photos, including photos of each team, check out Facebook.com/LDNSports