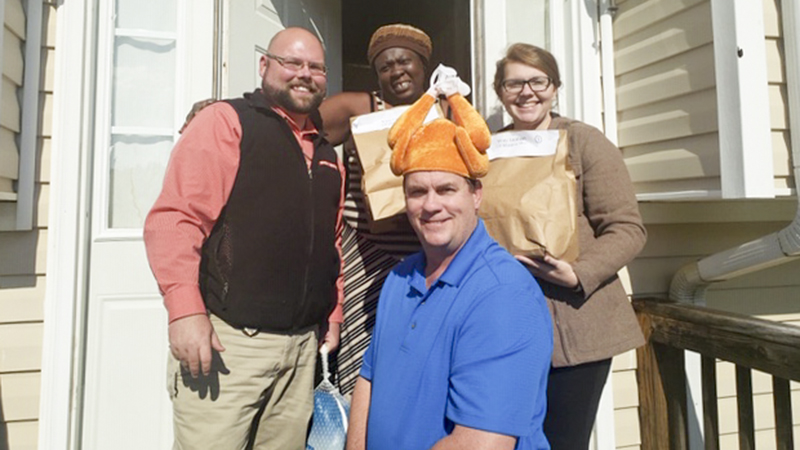 For the eighth year, the Hogansville Police Department delivered meals to local families for Thanksgiving.

HPD officers and volunteers gave out 100 meals to local families on Tuesday. That is the most meals delivered through the annual event to date, exceeding the 90 meals delivered last year.

“It is all part of making sure that people that might not have enough or might not have the opportunity … get a good Thanksgiving meal,” Chief Brian Harr said. “It is taking care of that. It is part of giving back to the community. It is a great partnership with Hogansville Elementary, God’s Bread Basket and the other donors.”

A large portion of the food came from canned food drives at Hogansville Elementary School and from the Callaway High School ROTC. Harr estimated that the two schools gathered 4,000 cans to be given to local families through canned food drives. Additionally, Love’s Truck Stop donated stuffing and cranberry sauce. Walmart in LaGrange gave HPD the turkeys at cost. Volunteers from HES also helped the HPD pack the meals.

“It started with helping seniors out to make sure that they have a good dinner for the holidays, and then we saw that we have families that are struggling this time of year,” Sgt. Jeff Sheppard said. “They are working really hard and trying, but [during] all of these holiday seasons, things seem to come up. So, we came up with a plan to help some of these families out, as many as we could, and just give them a little bit of help during the holidays.”

The meals include turkey, dressing, cranberry sauce, ingredients for side dishes and dessert. However, Harr and Sheppard agreed that the deliveries are about more than just food.

“It is giving back to the community, but it also lets the community see that our officers are not just out here to write tickets or their normal law enforcement duties,” Harr said. “The officers and the community [including teachers from HES] are delivering meals, so it is an opportunity for us to be able to give back to those people who might just need a little bit of help.”

In addition to local teachers, other members of the community also volunteered to pack and deliver meals.

“Some of the citizens who get the meals, they come over and help as well,” Sheppard said. “They’ll help deliver. They’ll help package just because they appreciate the meal, so they’ll come and help. It is really a community effort.”

The meals went out to people who HPD had learned may need a little extra help for Thanksgiving.

“We’ve actually had people today who have said, ‘We’ve got it all taken care of. We appreciate it, but give it to somebody else that may need it also if you have anyone who needs it,’” Harr said Tuesday. “We’ve had a couple of calls of people who we didn’t have on the list that know somebody [who needs Thanksgiving dinner], or somebody made a recommendation for a family, so we’ve been able to provide that.”

Harr said that he hopes the annual meal giveaway continues to grow, and he and Sheppard both recognized the work organizers and volunteers put into making the meal deliveries possible.

“Michelle Toth, who is our court clerk, she heads up this project,” Sheppard said. “She puts in most of the hours getting the names together, organizing the canned [food] drives, organizing the donations from businesses like Love’s and Walmart. We all work together, but she really heads up this project every year. She has done it every year and has done a phenomenal job with it.”

Harr said that any canned food not used for the Thanksgiving meal program will be given to families in need by the HPD throughout the upcoming year.