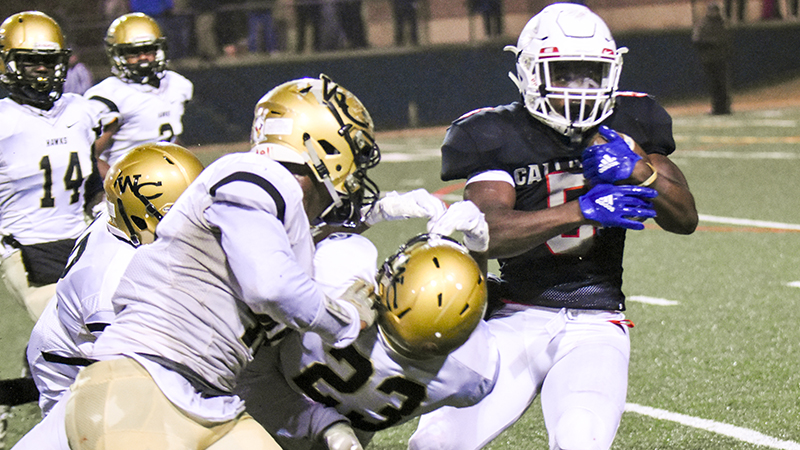 Qua Hines breaks a tackle on his way to a 40-yard, game-clinching touchdown run. --Daniel Evans

The Callaway Cavaliers flipped the momentum with an onside kick, and Qua Hines did the rest, scoring three touchdowns in the second half as Callaway defeated Washington County 35-20 Friday to reach the class AA semifinals.

The game was tied 14-14 at halftime, but the Cavaliers picked up the intensity in the second half to take control and pull away.

Callaway will play at Rockmart next week for a chance to play in the AA state championship game.

“We felt like Washington County had a little momentum in the second quarter. We could’ve hung our heads, but we didn’t,” said Callaway Head Coach Pete Wiggins. “Our guys responded and showed what this football team is all about coming out in the third quarter… I’m proud of this group. They are a bunch of winners.”

The momentum shifted in the third quarter, when Hines broke a 14-14 tie with a 51-yard touchdown run that put the Cavaliers up for good.

After a missed extra point, the Cavaliers recovered a surprise onside kick, setting up a 2-yard touchdown run by Hines on the first play of the fourth quarter.

The game had been back and forth up to that point, but two touchdowns in a four-minute span put the Cavaliers in control.

“Coach (Dusty) Hubbard came running down and said onside kick, and it was his call,” Wiggins said. “It was a big momentum swing. I’m proud of our boys for the execution.”

After the Cavaliers’ defense held on downs, a Callaway fumble gave Washington County the ball right back and the Golden Hawks took advantage.

Callaway recovered the ensuing onside kick, and Hines sealed the victory with an impressive 40-yard touchdown run with 1:40 left.

The senior broke several tackles on the play and eventually freed himself for a game -clinching run down the home sidelines.

“They were trying to strip it, and pull it out, but I wasn’t going down,” Hines said.

The first half of the game was back and forth.

Washington County drove into Callaway territory twice in the opening minutes, but the Cavaliers took the ball away both times.

The first turnover was a forced fumble and the second was an interception by D Bonner.

The game remained scoreless into the second quarter.

Callaway broke the scoring drought when Coleman connected with Markus Morman for a 12-yard touchdown with 10:33 left in the second quarter, the first of four touchdowns to come in the quarter.

Washington County responded with an 8-yard touchdown by Bloodsaw to tie the score.

Less than a minute later, Coleman threw a 60-yard pass to Jacob Freeman, who stiff-armed a defender and ran into the end zone to give the Cavaliers a 14-7 lead.

Washington County answered again on Bloodsaw’s third score of the game, a 1-yard run to tie the game at 14.

Washington County nearly scored on the final play of the half as well, but the Cavaliers made a tackle inside the 5 to preserve the halftime tie.

The second half was an entirely different story, with Callaway finding the plays needed to keep its season going.

“I think we realized that if we didn’t play our butts off that we’d be setting at home next week,” said Callaway offensive lineman Keiondre Jones. “That was one of the biggest things coach told us in the locker room, if we didn’t give it all, there was no tomorrow.”

Next week, Callaway will take on Rockmart, which defeated Jefferson County 48-13 on Friday night.