Giving away meals: West Point community gathers together to cook for Thanksgiving 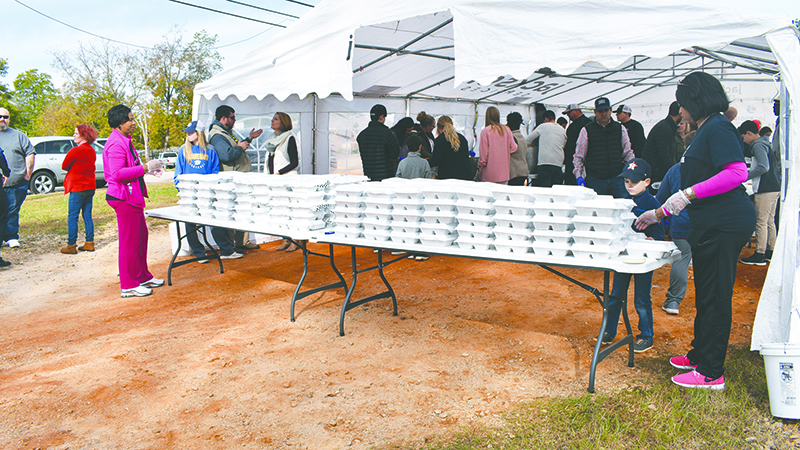 More than 50 volunteers helped provided free meals for anybody who needed one Thanksgiving morning in West Point. Mayor Steve Tramell and several restaurants prepared more than 500 meals for residents at the corner of East 10th Street and Martin Luther King Drive. -- Dustin Duncan

WEST POINT — Volunteers were waving down motorists on the side of the street to give away free Thanksgiving meals Thursday morning.

West Point Mayor Steve Tramell teamed up with local restaurants and Jackson Heating and Air to prepare more than 500 meals for those who needed or wanted a Thanksgiving meal.

In many cases, people just walked down the street, told the volunteers how many plates they needed and were on their way.

Others received meals just by driving by the tent on the corner of E. 10th St. and Martin Luther King Drive.

A smaller tent on the side of the road was set up as motorists were waved down by those helping out and asked if they wanted a free meal. A free meal was open to anybody who wanted one Thursday.

Tramell said there were probably more than 50 people who came out to help.

Inside the to-go container was turkey, mashed potatoes, green beans, sweet potatoes and a dinner roll.

Tramell said the restaurants in West Point began preparing the food early Thanksgiving morning and were ready to serve by 10:30 a.m. at the site.

The weather was also cooperative Thursday morning with the temperature reaching the mid-50s and sunshine throughout the morning and into the afternoon.

“I could not do this if the local restaurants didn’t pitch in,” Tramell said earlier this week. “I just got with everybody and asked them to do it, and they all said absolutely.”

West Point resident Keisha Conwell said this event was a blessing, adding that she is a single mother with two kids without family in the area.

“It would have been really expensive for me to prepare a fancy Thanksgiving dinner for just three people,” she said. “This is really helpful and every little bit helps.”

Mary Smith, who also lives in West Point, didn’t have anywhere to go Thursday for dinner. She said she lives alone and doesn’t have a lot of family nearby.

“It’s just me, so I wasn’t planning on doing anything special for the meal until I heard about this,” she said. “This is an excellent thing that will probably help a lot of people in need.”