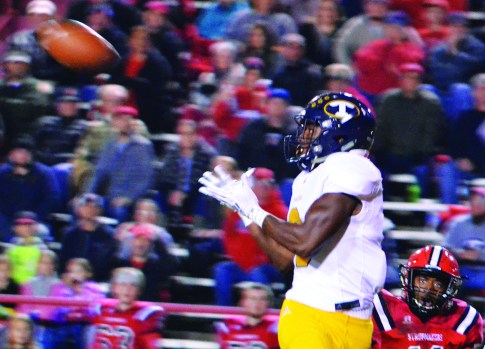 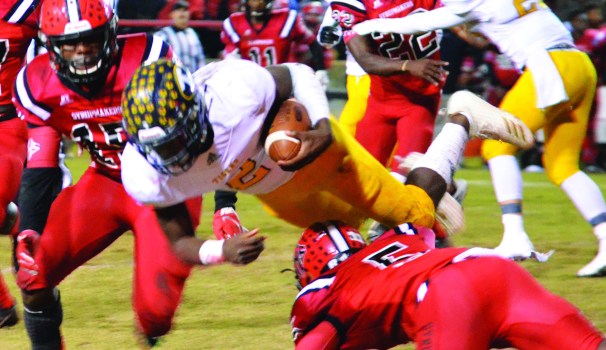 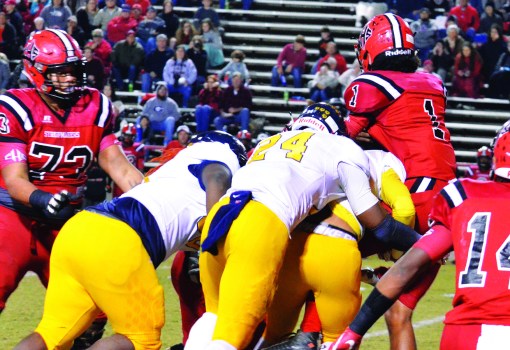 In a thrilling game with all sorts of momentum shifts and big plays, the Troup Tigers overcame a formidable Cairo squad 20-17 on Friday night to advance to the Class AAAA semifinals.

Troup will be on the road again next Friday against Blessed Trinity, with the winner advancing to the championship game to play either Cartersville or Marist.

Troup (12-1) took the lead early in the fourth quarter, with wide

The defense did the rest, making some critical stops to secure Troup’s second trip to the semifinals in school history, and its first since 2001.

“We had to have a lot of grit, a lot of toughness,” Troup head coach Tanner Glisson said. “We had to dig deep. This is a tough place to play, and their kids fought us tooth and nail. It was a heck of a football game.”

Cairo was leading 17-13 late in the third quarter when it went for it on fourth-and-one in Troup territory.

Troup’s defense came through with one of the most impactful plays of the game, holding Cairo to no gain to give the ball back to the offense.

“It was really huge,” senior defensive back Alonzo Ogletree said. “We talked before we went on the field that we’ve got to get a stop. That’s all there was to it. We got the stop.”

The Tigers took over at their own 28-yard line with 12 seconds left in the third quarter trailing by four points.

Quarterback Kobe Hudson, who had an 80-yard scoring run earlier in the second half as well as a 55-yard touchdown pass to Joko Willis in the first half, found Thrash for back-to-back completions of 34 yards and 28 yards to put the ball on the Cairo 10-yard line.

Three plays netted four yards, and the Tigers faced a key fourth down from the 6-yard line.

Rather than attempt a field goal to perhaps get within one, Glisson kept the offense on the field.

Hudson took the snap, and he flipped the ball to Smith, who lobbed a pass in the back of the end zone to Thrash, who made the catch for the go-ahead touchdown.

“We practice that (play) so much,” said Thrash, who had three catches for 72 yards on the go-ahead drive. “We have a lot of confidence in our offense. It was important to get six, and not the field goal. That showed how bad we wanted it, to win the game.”

The Tigers were ahead, but their lead was a scant three points.

The Syrupmakers’ ensuing possession ended with a punt, and the Tigers took over at their own 17-yard line with 3:41 to play.

Troup picked up one first down, but it had to punt, and Cairo began its final possession at its own 38-yard line with 52 seconds to play.

The Syrupmakers got to the Tigers’ 35-yard line before a penalty knocked them back five yards, and the game ended on an incomplete pass.

The celebration was on.

“It took all of us,” Glisson said. “It was a great team victory, and now we’re in the semifinals. We’re one step closer.”

The Tigers, after making the three-hour trip to south Georgia, made it look easy on their opening possession, driving 80 yards in seven plays for the touchdown.

The Tigers were on their own 45-yard line when Hudson dropped a perfect pass over the middle into the hands of senior Joko Willis for the 55-yard touchdown, and Troup led 7-0 less than three minutes into the game.

Cairo answered with a 58-yard scoring drive that was capped by a Jarion Carter 10-yard touchdown run, and the game was tied 7-7 with 11:05 to play in the first half.

After an interception with 26 seconds left in the half, the Syrupmakers had a chance to pad their lead, but the Tigers blocked a Jones field-goal attempt, and it was a 10-7 game at the break.

Cairo dominated the early stages of the third quarter, driving deep into Troup territory, but it missed two field goals, so it remained a three-point game.

Following the second of those two missed field goals, the Tigers reclaimed the lead.

On a first-down play, Hudson got to the left sideline, and he took off for an 80-yard touchdown run, and the Tigers led 13-10 with 4:30 left in the third quarter.

The Syrupmakers needed 68 seconds to go back on top.

Troup’s next possession ended with a punt, and Cairo got the ball at midfield with a chance to put a stranglehold on the game.

Troup’s defense was up to the challenge, though, making the critical fourth-down that led to the go-ahead touchdown.

There were some tense moments down the stretch, but the day belonged to the Tigers.

“At halftime, we weren’t even worried about losing,” Thrash said. “We knew we’d get it back. We were the better team, and in the second half we just played our ball.”