Christmas with the sons: Sons of Lafayette prepare for annual Christmas concert 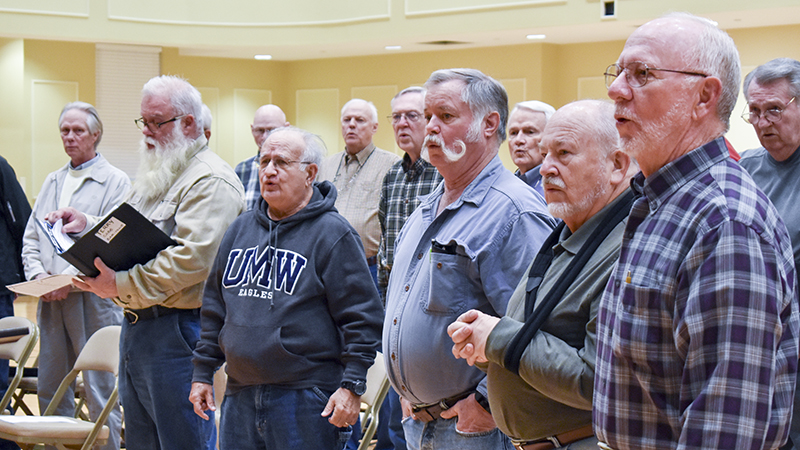 Above, The Sons of Lafayette Male Choir practices for its Christmas concert. -- Alicia B. Hill

It’s beginning to sound a lot like Christmas as the Sons of Lafayette Male Choir warms up for its annual Christmas with the Sons concert.

On Dec. 8 and 9, 36 male voices will join together to bring a little Christmas cheer to the sanctuary at First Presbyterian Church in LaGrange.

“Christmas to me is a rush, but to me, music makes Christmas,” said Don McWhorter, the president of The Sons of Lafayette’s board of executive officers. “When I can listen to good Christmas music, I get into the spirit so to speak. It really puts me in the mood for Christmas, and I think that is what the Sons of Lafayette bring as a focus. … It is a good way to start the season.”

The male choir has been practicing for months under the direction of Interim Artistic Director Darian Krimm, who took on the directorial role earlier this year.

“It’s been a good few months since the very tail end of August, beginning of September when we really started rehearsing,” Krimm said. “Things have really been going well, and I’ve been really delighted with the work that the men do, the musicianship they bring to the table and the level of commitment and the level of excellence that they show up with week after week.”

This year’s concert will feature a variety of musical styles ranging from serious, traditional pieces to more light-hearted songs.

“We have the full gamut of old, familiar carols — things like ‘Chestnuts Roasting on an Open Fire,’ a wonderful arrangement of that to this wonderful, upbeat ‘Deck the Halls’ — but a balance of sacred and secular to really tell the full Christmas story,” Krimm said.

“We have familiar carols plus a few newer carols. There is a song about the shepherds coming to the manger that is really a beautiful, heartfelt song that people may not know, but it is one that they will listen to and connect with right away.”

Krimm said the concert will also feature a flutist, cellist and a four-hand piano accompaniment at different points in the concert.

Krimm and McWhorter said that they hope people from throughout the community will attend the concert.

“We invite friends, family, next door neighbors, work associates and people off the street to come,” McWhorter said. “Everyone will enjoy this. It is really for everyone in the community. We want to focus on what they enjoy and what fits their needs for the season.”

Christmas with the Sons will take place on Saturday, Dec. 8 at 7 p.m.  and Sunday, Dec. 9 at 3 p.m. Tickets cost $15 in advance, $20 at the door and $5 for students. Admission is free for children under the age of 12. Children are strongly encouraged to attend. Tickets can be purchased at Plum Southern, Marketplace on Lafayette Square, from members of the Sons of Lafayette or at Sonsoflafayette.org.

The Sons of Lafayette Male Choir is also looking for more men to sign up to participate in the next choral season.

“Right now, we would really love for folks to start thinking about — even next season — to come join the choir,” McWhorter said. “We begin on Jan. 14. It is a Monday, and so we would encourage anybody in the community to come join us for next season.”