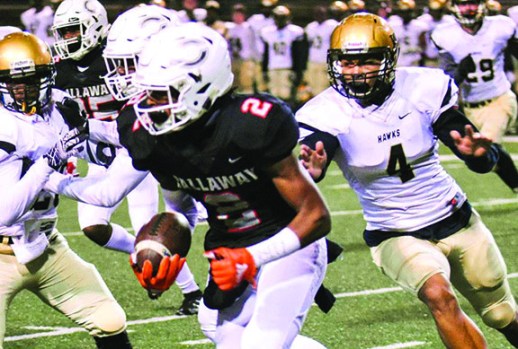 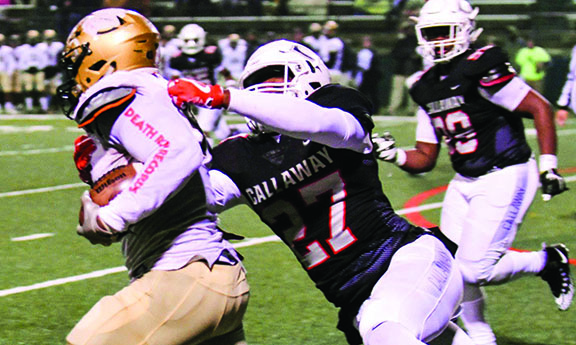 Over the past decade, the Callaway Cavaliers have had plenty of big-play receivers, and Jacob Freeman is the latest one.

Freeman was Callaway’s leading receiver last season, but he was the starting quarterback for the first nine games this year.

Freeman was moved back to wide receiver for the regular-season finale against Jordan, and he has remained at that position for the three playoff games, with sophomore Demetrius Coleman playing quarterback.

The move has helped Callaway’s offense take off, with Coleman and Freeman forming a dynamic combination.

In last week’s 35-20 win over Washington County in the quarterfinals of the Class AA state playoffs, Freeman had three catches for 78 yards with a touchdown.

Freeman also had a phenomenal 80-yard touchdown reception that was negated because of a penalty.

Freeman went up and, doing his best Randy Moss impersonation, outfought the defender for the ball and raced the rest of the way for the touchdown.

“You go back to (Quantavius Leslie), Terry Godwin, Braylon Sanders, and Jacob, it’s a real similar situation,” said Matt Napier, Callaway’s offensive coordinator. “And to have Demetrius be able to step up and be accurate and throw the ball on time is so big.”

COMING THROUGH: During the first half of last week’s game, junior linebacker R.J. Williams went down with an ankle injury.

Williams, who has been a starter since day one, has been among Callaway’s tacklers in every game this season, and he’s been a steadying influence at the inside linebacker position.

Fortunately for the Cavaliers, they had someone else ready to come in and capably hold down a linebacker position.

Sophomore Charlie Dixon stepped in and played well at linebacker, and he helped Callaway’s defense get a handle on Washington County’s run-oriented offensive attack.

“(Williams) was out of the game, and Charlie did a great job of coming in, and he had to play Sam the rest of the night,” Callaway defensive coordinator Dusty Hubbard said.

Dixon is also a running back for the Cavaliers, and he has been effective when called upon this season, but at the moment he is much more valuable on defense.

“He did a really good job of giving us some stabilization in there,” Hubbard said. “He’s a backup and doesn’t get as many reps during the week, but he knew what to do, and did well.”