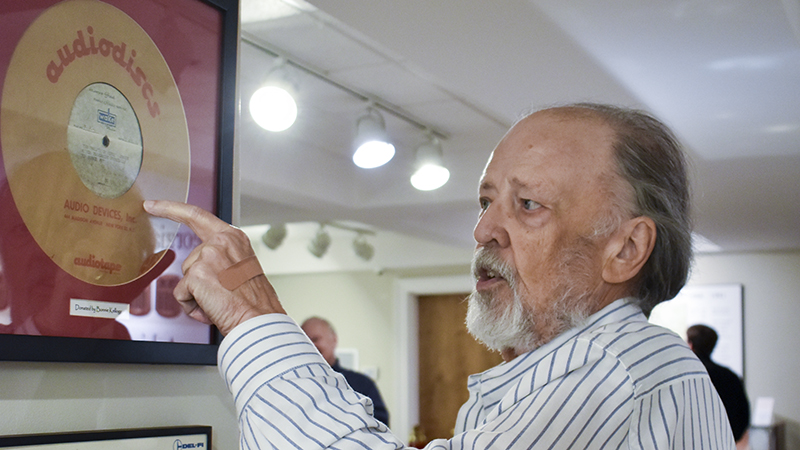 On Sunday, locals got their first glance at what a Georgia Radio Hall of Fame museum would look like when an exhibit by the awards organizers opened its doors at Legacy Museum on Main.

The exhibit will be on display at the museum until June 15, and organizers hope to find a permanent home for displays that cover practically every aspect of radio history in Georgia, so that even more artifacts can be displayed.

“The whole premise of the museum is based on the history of Georgia radio, and that came as the organization started growing in 2007, more and more things were donated to us,” said John Long, the co-founder of the Radio Hall of Fame. “Artifacts, pictures, audio recordings, radios, equipment [were donated], so all of a sudden it became obvious to us that we needed to be in the museum business.”

The Georgia Radio Hall of Fame began in 2007 and is used to honor the pioneers and professionals who shaped radio in the state.

The most recent awards ceremony was held in LaGrange in October. Long said that he never set out to start a museum, but he said that it made sense considering the artifacts that have been donated over the years.

“We don’t want to be in the museum business,” Long said. “We never wanted to be, but I’ve got a storage room big enough to put an RV in that is full of stuff. This is a few of the over-300 antique radios that we had.”

He also noted that the idea of starting a museum fit well with the Radio Hall of Fame’s mission.

“It goes right along with the mission of our organization, which is to honor Georgia radio pioneers and present-day people and also to preserve the history of Georgia radio,” Long said. “That includes written or oral [history]. We’ve got projects with Georgia State University that includes some oral histories with some people who have been around Georgia radio for many years, so that is what it is all about. It has also given us a showcase for people that we’ve inducted.”

In the 12 years since the Georgia Radio Hall of Fame began, more than 100 people have been honored. Several of those honorees attended the exhibit’s opening on Sunday.

“It means that a lot of things are going to be remembered that would otherwise be totally forgotten,” said John Moore, a Radio Hall of Fame honoree. “Here [in the exhibit] is a tube. It’s big, and it’s impressive. The world has changed since then. Radio was all local, live 24-hours a day if you were lucky, daytime if you weren’t.”

Some of the equipment on display in the exhibit would have been commonplace in past decades, and inductees hope that a museum will help people remember and understand what radio was like in the past.

“I think it is a nice platform for people to learn about industries like the radio business, which is still a very, very big industry in the country, mostly talk radio,” said Julian Hurst, a 2016 Founders and Directors Award Recipient.

They also noted some of the changes to radio over the years.

“That [time in the 50s and 60s] was an era in which communities would tend to adopt a station,” Moore said. “You still have that in a smaller town, but a community would rally around a station.”

While it is currently unknown where the Georgia Radio Hall of Fame’s final location will be, the Troup County Archives was pleased to give it a platform in the community.

“The Legacy Museum on is pleased that they are here,” said Shannon Johnson, the executive director of the Troup County Archives. “We are happy to offer them a space, and they are here until June 15.”

The Legacy Museum on Main is located at 136 Main Street and is open Monday through Friday from 9 a.m. to 5 p.m. and on the first and third Saturdays of each month from 10 a.m. to 4 p.m.