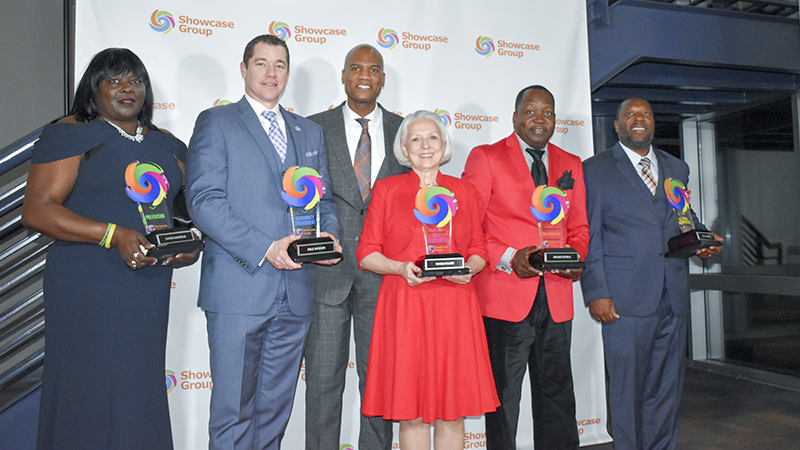 On Saturday night, a crowd gathered at Callaway Conference Center to applaud the work of five individuals making a difference in the LaGrange area.

The 2018 Showcase Awards was the first round of the awards to take place in Troup County, but the Showcase Group’s work has been making a difference in other parts of Georgia for years.

“The Showcase Awards started about 5 years ago with two foster kids of mine, TJ and Trevail, who were in and out of the juvenile justice system, so I wanted to figure out why they kept going back and forth into the system,” said John Kennebrew, the founder and executive director of the Showcase Group. “So, I did something about it and actually got my first job as a psychotherapist inside the youth detention center.”

Soon, Kennebrew began organizing volunteers to visit the youth detention center, and the organization that began with his visits now serves cities all over the state. Now, Kennebrew hopes to help youth from the Troup County through a five plus month mentorship plan designed to teach them the skills they need to stay out of jail.

“This was our next region of impact, and so we wanted to come here because we noticed that there are kids who are transitioning from youth detention centers back into the community,” Kennebrew said. “However, they are going right back into the system, and so that is why we are bringing our advocacy initiative here to LaGrange.”

“They were chosen by a host committee right here in LaGrange,” Kennebrew said. “They chose people who they considered a pillar, people who were outstanding and doing great work in this community. It has all come together, and here we are tonight to really highlight the work that they are doing in spite of the challenges that are in this region. They continue to work and go forward in the work that they are doing.”

Multiple speakers came forward to sing the praises of the honorees and their work in the LaGrange area, but LaGrange Mayor Jim Thornton summed up the reason why they are all important to the community early in the night.

“There are so many people not only within our community but in and throughout the state who are passionate about at risk youth, and certainly we should applaud what John and his team do at Showcase,” Thornton said. “… This is obviously a need. I think we could all sit here and give plenty of testimonies about the need, but it is not enough to just identify the need. You have to actually do the work to address the need, and so I applaud all of you.”

Brownlee received the prevention award for her work with local veterans. Brownlee offers guidance and assistance for veterans through Discovering Soldiers’ Potential Waypoint. The group has reportedly helped thousands of veterans in the region.

“Every individual person who joins the armed forces to protect this great country, we do it for one reason, and that is for our families because that is mostly all we know,” Brownlee said. “I was 17, 18 when I left this town [to serve in the U.S. Army].”

Jackson received the community engagement award for his work within the community, especially relating to individuals with special needs. In addition to offering support for programs and schools that will benefit special needs children, Jackson also began offering temperature controlled tents at major local events last year in order to give families that need that space the option to attend those events. Jackson said that he began sponsoring the tent through his business, Jackson Services, when he realized that other children like his son, who is autistic, needed those spaces.

“You begin to realize when you are faced with something that you don’t understand that unless it is you, as a special needs father and as a special needs family, you learn one of the most valuable lessons is what you don’t understand,” Jackson said. “You learn empathy, and one of the most valuable lessons in my life is the fact that I do not know what it is like to come from another’s perspective.”

Cofield received the inspiration award for developing and implementing the Empowerment Wednesday program, which has been credited with improving behavior in classrooms by challenging students at Clearview Elementary School to dress up on Wednesdays. Local leaders have joined Cofield some weeks, but his determination has been what has kept the program going. Empowerment Wednesday also sponsors a scholarship that furnishes dorm rooms.

“My life mission [is] if any young man comes into my presence and gets in close proximity to me, if I have one work from them, I tell them this, ‘Chase your dream because you might just catch it,’” Cofield said.

Walker received the self-actualization award for her work with Troup Transformation, jail ministry, the LaGrange-Troup County Homeless Coalition and her inspirational television show.

“As I look around the room, I see so many of you that could have received this award, and we are all receiving it together for the work that we are doing,” Walker said. “Troup Transformation was formed to help provide Christian influence and support to government, business, education, family, arts and entertainment, media and the church itself. We found that God not only wants to help people reach their full potential, he wants cities to reach their full potential.”

Childs received the Facing Our Future Award for his tutoring and mentoring work with local students through the Adaptive Growth and Cultural Advancement Organization. The group regularly meets at the William Griggs Recreation Center, and Childs has worked with AGCAO to improve the grades of students who take part in the program.

“It is a very, very touchy and very, very emotional subject when I talk about the AGCAO and the afterschool mentoring and tutoring program that was started almost five years ago,” Childs said. “… [AGCAO] is meant for at risk kids and meant for those kids that lack the opportunities that most kids do not have.”

To learn more about the Showcase Group, visit Showcasegroup.org.