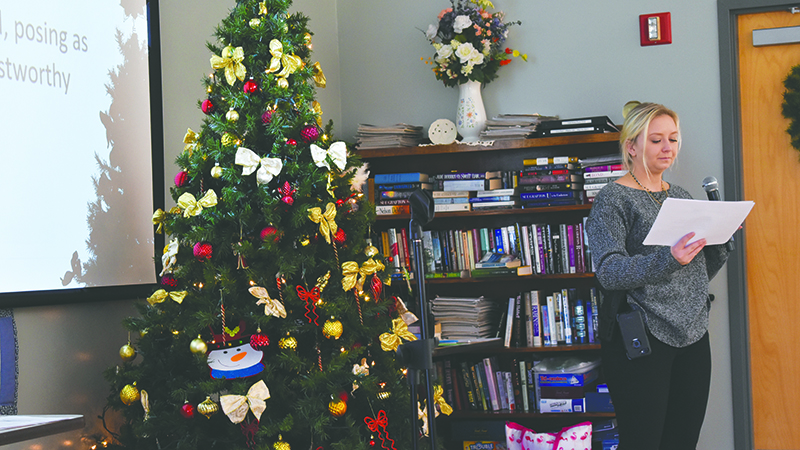 WEST POINT – The holidays can be a busy time, and the West Point Police Department wants to be sure individuals are aware of all scams during the season.

The West Point Police Department set up at the West Point Active Life Wednesday morning to inform residents about the dangers of scams.

Police Chief Donald Britt and Investigator Ann Okeson went over several potential scams that the elderly need to watch for.

Britt said the entire event is all about getting the word out about safety.

“We want all our citizens to be aware,” Britt said. “More scam artists come out during the holiday season, and it just gets worse. They try to catch people off-guard and try to steal their items.”

Okeson said Monday during her presentation that financial scams targeting seniors have become so prevalent that it is now considered “the crime of the 21st century.”

She said financial scams often go unreported, making it hard to prosecute. Additionally, she said it’s not just wealthy seniors that are targeted and more than 90 percent of scams are committed by a person’s own family member, usually their children.

Okeson also spoke about funeral and cemetery scams. She said scammers read obituaries, then call or attend the funeral service of a stranger to take advantage of a grieving widow or widower. Scammers may claim the deceased had an outstanding debt with them and may try to extort money from relatives.

Telemarketing is the most common scheme, Okeson said. She said scammers use fake telemarketing calls to prey on older people, who make twice as many purchases over the phone than the national average, according to the Georgia Department of Law.

Because there is no face-to-face interaction and no paper trail, police say telemarketing scams are hard to trace, and once a person is scammed, their information is typically shared between other scammers, making that person a possible repeat victim.

Internet scams can be especially successful on elderly victims, Okeson said. Pop-up browsers are mimicking virus-scanning software or downloading a fake anti-virus program, which would contain an actual virus with all the person’s personal information on the computer.

She said people fall for these scams because they are unfamiliar with aspects of browsing the web.

Sweepstakes and lottery scams will tell victims that they have won, but they would need to make some sort of payment to unlock the prize. Often, Okeson said, the victim will be sent a check to be deposited into their bank, and the scammer will collect money for the “taxes or fees” on the prize. Then, the victim will see the check sent to them bounce and will lose the money from the check and usually face additional fees.

“If it sounds too good to be true, it usually is,” he said.

Another scam Okeson talked about Wednesday was something called the “Grandparent Scam.” She said scammers will call an older person and start the conversation with “Hi Grandma, do you know who this is?” The unsuspecting grandparent could attempt to guess the name of a grandchild, and the scammer has established an identity without any research.

Once the scammer can fake the identity of a grandchild, they will usually ask for money for some unexpected financial problem, often through a money order service like Western Union or MoneyGram.

Okeson said if anybody falls victim to a scam, call the police department and make a report, so there is something to report to their bank or credit card company.