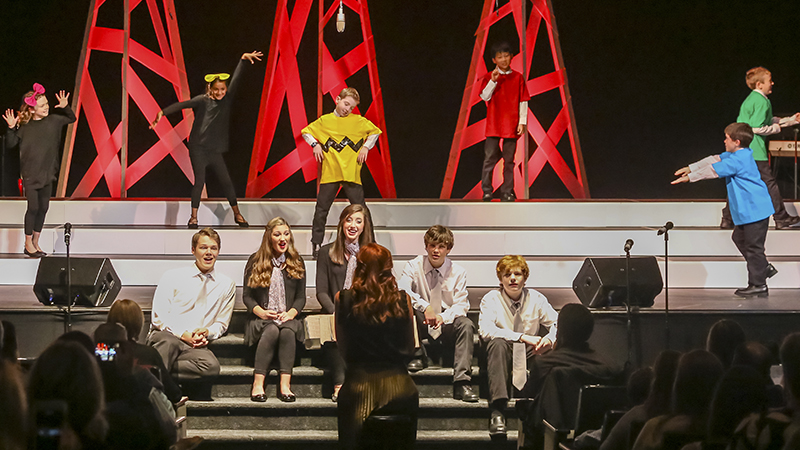 The Young Singers of West Georgia perform songs from their Christmas Memories concert last year. The Young Singers, Sons of Lafayette and LaGrange Symphony Orchestra are all performing holiday concerts this weekend.(Contributed)

There are several Christmas performances on the horizon taking place in LaGrange in the upcoming days.

This weekend, the Young Singers of West Georgia will perform their “Christmas Memories” concert under the direction of Stacey Hardigree. The performance will take place at the LaGrange High School Auditorium Friday at 7 p.m. and Saturday at 3 p.m., and it will feature traditional classics such as “Silent Night,” “Carol of the Bells” and “It Came Upon the Midnight Clear” along with several songs from “The Polar Express.”

“I think [the concert] is a wonderful way to get into the holiday spirit,” said Amy McDow, the marketing director for Lafayette Society of Performing Arts. “The music is extremely well done and presented with the vibrancy of youth.”

Tickets for this event are $12 for adults and $8 for children. The public is encouraged to attend and support the youth who will be demonstrating the music they have learned throughout the past few months.

The Sons of Lafayette’s Christmas performance will also take place this weekend. Under the new direction of Darian Krimm, the concert will be held Saturday at 7 p.m. and Sunday at 10 p.m. Tickets for this event are $15 and can be purchased at Plum Southern and Marketplace at Lafayette Square.

In addition to these shows, the LaGrange Symphony Orchestra will put on its annual Holiday Pops concert at Callaway Auditorium Dec. 11 at 7:30 pm. Several pieces will be performed, such as Suite No.1 from Tchaikovsky’s “The Nutcracker” and a Christmas medley including “Sleigh Ride” by Leroy Anderson.

The symphony is especially excited about this year’s holiday concert because of the unique opportunity it will have to partner with two guest performance groups, The Choral Society of West Georgia and The Lafayette Christian School Choir, as well as local sergeant and composer Rob Kirby, whose compositions will be premiered on the concert.

“It’s really exciting to have a composer live among us,” said Raylene Carter, the executive director of the LaGrange Symphony Orchestra.

The first piece composed by Kirby is titled “Glory to God in the Highest,” and the second one is called “Away in a Manger,” which has the same lyrics as the traditional Christmas carol, with an original composition. Kirby’s inspiration for “Away in a Manger” was the state of the world.

“There’s a lot of divisiveness now in our country,” Kirby said. “I think our world needs the Bible more than ever. That’s basically what the song says.”

Kirby said that it can sometimes be a challenge to find time to compose music aside from his work in criminal investigation with the LaGrange Police Department. He said he has to squeeze in time whenever he can, which sometimes means multi-tasking while completing a composition.

Kirby also said that he was honored and thankful for the support of both the LaGrange Symphony Orchestra and the Choral Society of West Georgia.

“It’s a great feeling to have that many people working together to create something that I put on paper,” Kirby said. “Music written on paper is a road-map, it doesn’t do anything by itself. It takes people to perform it to get you to the destination.”

“[The concert] will put you in the Christmas spirit,” Kirby said. “It’s always a great concert, and I think it’s important to support the arts in our community. They need support. I hope people will show up.”

LaGrange is the smallest city in America with a professional symphony orchestra, and the symphony has grown significantly as an organization throughout the past several years.

Carter said that Dr. Richard Prior, the conductor of the LaGrange Symphony Youth Orchestra, often says that the audience doesn’t come to a concert just to hear music they could otherwise listen to on a CD. The audience comes to watch musicians make music in front of their eyes.

“Watching it all come together is part of the magic to me,” Carter said.

Tickets for this event can be purchased from the symphony’s website or by calling the symphony office at 706-882-0662.