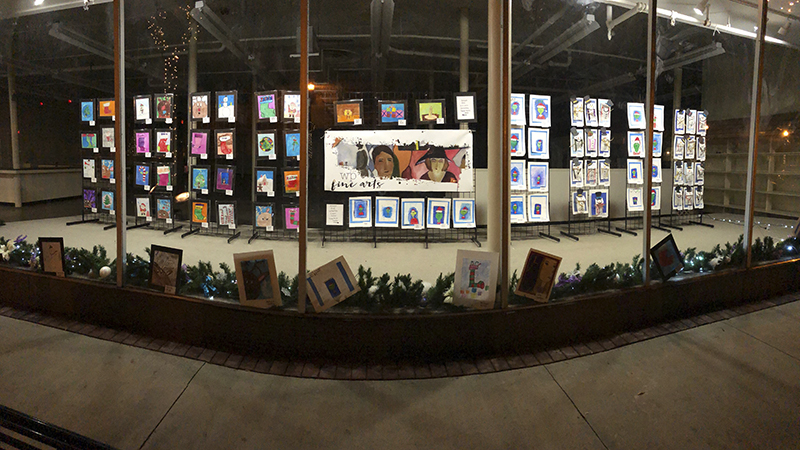 West Point Fine Arts has set up a student art display in the window of Downtown West Point’s old Craftmaster building. The art will be exhibited until after the New Year. (Contributed)

West Point Fine Arts has spent their inaugural year holding exhibits, gaining members and displaying art that is for locals, by locals.

To continue the trend and add to the Greater Valley Area’s holiday cheer, WPFA worked with local schools to light up part of downtown West Point.

In the window of the old Craftmaster building where they held their first exhibit in the spring of 2018, WPFA has set up a free exhibit of sorts, showing off art created by elementary school children at W.O. Lance in Lanett and LaFayette-Lanier in Valley. WPFA founder Thea McElvy said that the idea came to her when she noticed how much was going on in the area to celebrate Christmas.

“I knew that the parade was coming to downtown West Point and everything was lit up except for this window,” McElvy said.

The building, located on West 3rd Avenue, was on the path of Thursday’s Christmas parade.

McElvey said that the location of the public exhibit was perfect to display the art of the area’s younger generation.

“Christmas is about children anyway, so it seemed like a no-brainer to put children’s art in there and light that window up,” McElvy said. “WPFA has always wanted to help with all different age levels and bring all art, not just exhibits, to the community. This was a way to get another age group shown.”

The students were instructed to create the art for the exhibit by their art teachers, who are also local artists. W.O. Lance’s Tawana Bradford Henson and LaFayette-Lanier’s Suzie Britt frequent area art events, as observers and presenters, for WPFA and the City of Valley Arts Council.

McElvey said she is most excited about the downtown display because of the unity it brings to the Greater Valley Area’s art scene. She hopes it will continue to inspire locals to support the arts and embrace creativity in their kids.

“I am so proud that our schools support the arts more than a lot of other places and have the art teachers and programs on offer,” McElvy said. “I really want to let a light shine on that because it’s a wonderful thing.”

The display is scheduled to light up downtown until after New Year’s celebrations. Speaking on the new year, McElvy said that WPFA is already working on their next big show. Wanting to draw inspiration from nature, its early spring show will feature all things natural and re-used.