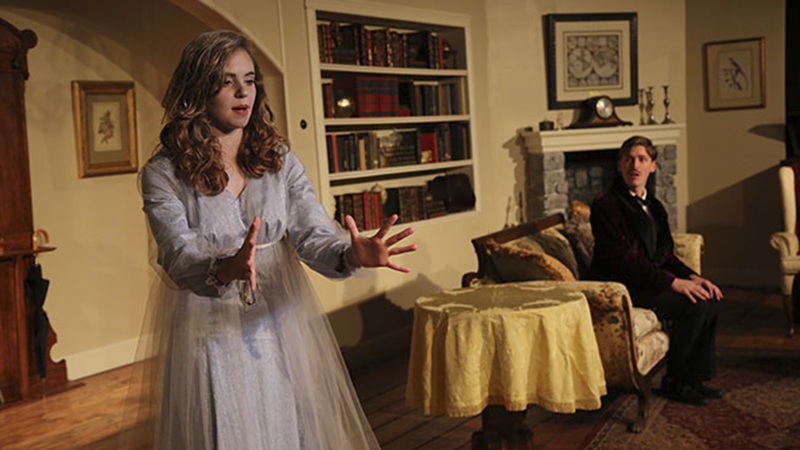 Poor Charles Condomine. In Noel Coward’s play “Blithe Spirit,” Charles is happily remarried to Ruth after the tragic death of his first wife, Elvira. His life gets complicated after Elvira makes a return from the “great unknown” during a séance gone terribly wrong.

LaGrange College Theatre is presenting Coward’s classic comedy at 7 p.m. through Tuesday in the lab theater at Price Theater, with a 2:30 p.m. matinee on Sunday.

“This is a very tough script to learn because he was very specific in his word choices,” Riggs said.

It was also a very tight rehearsal schedule.

“The cast got their scripts the day after ‘Crazy for You’ closed at the end of October,” Riggs said. “All of the actors were also in that show, so it was a very fast turnaround for them.”

Learning the proper English accent was a challenge, especially for sophomore Hayden McCullough, who went from being a cowboy in “Crazy for You” to a smart British doctor, literally overnight.

“I have a deep southern accent that worked fine as a cowboy, but not so much in a Noel Coward play,” McCullough laughed. “Dr. Bradman is very funny and sarcastic in a sharp and intelligent way. The two are completely different.”

Senior Ashlynn Eubanks, who plays Mrs. Bradman, said Coward’s script made it easier to get into character.

“Speaking such eloquent words in a British accent gives you an entirely different posture,” Eubanks said.

Senior Eli Grant, who plays Charles, said it’s been a joy to play the hapless husband.

“It’s interesting to portray the different relationships he has with his wives,” Grant said. “Elvira has been dead for seven years, but hasn’t aged a bit. His second wife is more mature and structured, while Elvira brings back the childlike joy he felt while he was married to her. He is really stuck between these two women.”

Senior Leigh Anne Hamlin said she is having the time of her life playing Madame Arcati, the medium who accidentally brings Elvira back.

“Usually I’ve had roles that were in some way like myself,” Hamlin said. “Madame A is nothing like me – she’s really gone off the deep end. She has no limits to her imagination. This role is a dream.”

“Elvira is incredibly mischievous and fun,” Young said. “She is just so happy to be home again — she has a lot of life for a dead person.”

“He literally writes who your character is — it’s all there in everything the character says,” Fletcher said. “He shows how people look at things from different perspectives, and everyone in this show is so likeable. There really isn’t a villain in the piece.”

Even with all the challenges, including final exams that begin today, Riggs said she couldn’t ask for anything more.

“I’m so proud of all of these students,” Riggs said. “They’ve worked so hard and have done a great job in bringing Coward’s sophisticated humor to life.”

Tickets are $10 for adults, $8 for senior citizens (55 and older) and non-LC students and free for LC students faculty and staff. The box office is open weekdays from noon until 4 p.m. Email to make reservations at priceboxoffice@lagrange.edu, or call (706) 880-8080. If emailing or calling, leave a name, the performance date/time and number of tickets desired, type of tickets and a call-back number and email address for confirmation.