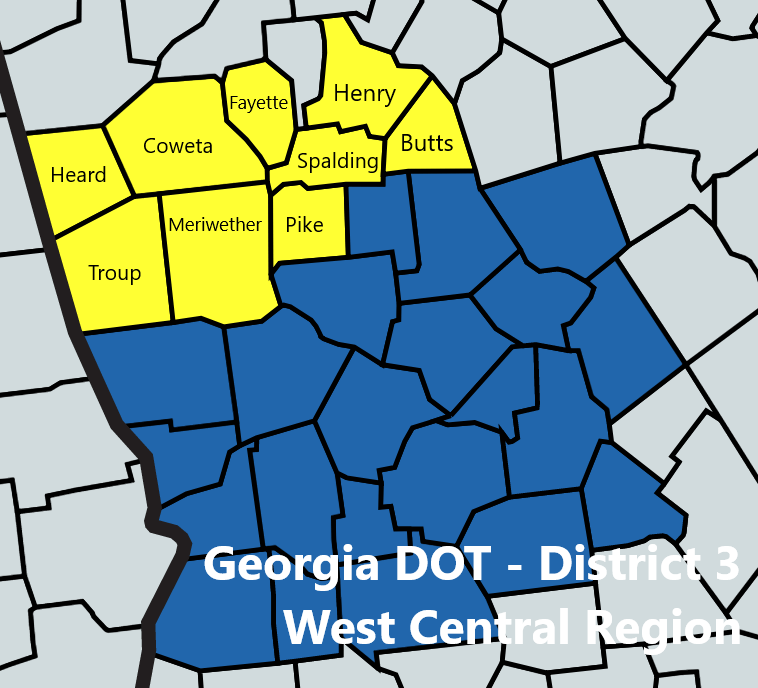 The west central Georgia counties that will have state highways and interstates brine-treated are Heard, Coweta, Fayette, Henry, Butts, Spalding, Pike, Meriwether and Troup. In the map above, those counties are yellow. (Contributed)

Georgia Department of Transportation maintenance crews throughout north and central Georgia will brine-treat state highways and interstates on Monday night in anticipation of possible black ice conditions during the overnight hours, according to a GDOT press release.

The National Weather Service in Peachtree City released a special weather statement on Monday, warning that Monday night temperatures could drop into the upper 20s to lower 30s across north and portions of central Georgia, including Troup County. NWS warned that the colder temperatures combined with moisture left on surfaces from recent precipitation will lead to slick or icy spots on roads as well as other surfaces such as porches, decks and sidewalks Tuesday morning. The most likely locations for black ice on roadways will be secondary or untreated roads as well as bridges and overpasses.

The threats for black ice and slick spots will diminish through the morning hours as temperatures are expected to warm through Tuesday afternoon to well above the freezing mark.
According to GDOT, when the crews deploy, they will drive large trucks with huge brine tanks attached through the affected counties, spraying the road surfaces with the brine. The highly-concentrated salt solution lowers the freezing point of water, preventing ice from forming on the roadways. If motorists encounter a brine truck while driving Monday night, they should slow down, give it space and be alert to its operations.

“Out of an abundance of caution and following the latest update from the National Weather Service, state government will delay opening for non-essential personnel until 10 a.m. tomorrow,” said Deal. “Our top priorities are to ensure the safety of Georgians and to allow the Georgia Department of Transportation to keep our roads as safe as possible. I encourage those in affected areas to remain off of the roads early tomorrow morning. We will continue monitoring the weather and will provide updates as necessary.”

Rachel Camp, the Troup County citizen engagement specialist, confirmed that the county will be monitoring road conditions, and while Troup County Government Center hours had not been altered as of 4:45 p.m. on Monday, updates will be made as necessary

Katie Mercer Van Schoor, the City of LaGrange marketing/communications manager, said that employees are on standby to use a sand truck to cover ice if any is found in the city.

The Georgia Department of Labor will delay the opening of a number of its facilities in the northern half of the state on Tuesday due to concerns about icy conditions from the lingering winter storm, including the LaGrange Career Center. Acting on the latest forecast from the National Weather Service, Governor Nathan Deal also issued an order delaying the opening of various other state offices. All affected facilities will begin operations at 10 a.m.

The National Weather Service has warned that counties basically north of I-20 may have black ice on roads as temperatures drop below freezing overnight.