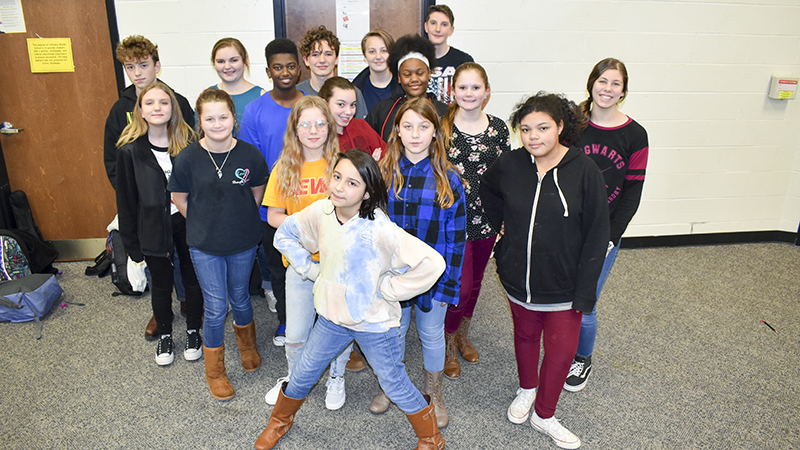 The Callaway Middle School drama club team poses for a photo at the school earlier this week. --Alicia B. Hill

The CMS drama club was formed at the request of students, and held its first parent meeting on Friday to discuss plans for rehearsals and its first performance. Organizers said that many students came out for the initial club meeting, and about 32 students are currently taking part in the free after school club.

The club’s first play will be “Stargirl.” The play is based on a critically acclaimed young adult novel by the same name, which is also scheduled to have a film released next year. The story follows middle school students, making it an easily relatable choice for the young actors.

“I really love acting, and I have a real passion for theater,” said Mikayla Gross, a student. “It is really interesting to me. I love to see how it works, and I love trying new characters.”

Gross said that “Stargirl” will be the first play that she had been a part of, but for some of the other students, it will be their first play ever.

“I’ve always had an interest in acting, and I never really had a chance to, so this is my chance,” said Claire New-Matthews, a student.

New-Matthews said that she was in several plays in elementary school, and she is excited to be in a production with her middle school friends. She will play the antagonist.

“I’m the popular girl in school, and I basically try to ruin Stargirl’s life because she is different,” New-Matthews said of her character.

Goss said she is also excited about the role she will play in the upcoming performance.

“I’m the professor,” Gross said. “I am the moral compass of everything, everyone’s guide, the person they come to talk to, a teacher.”

Even though the club was just formed, Fisher Brawner, who is directing the show, said that the students have made impressive progress so far.

“They’ve put in a lot of hard work,” Brawner said.

“I’m very proud of the cast because they are already reading through their scripts and looking at lines, and a couple of them are almost off book for scene one, which is 15 pages long. They have put a lot of work in, and it is a first-year program, but I have a lot of confidence in them.”

Brawner said that he has participated in productions through the Lafayette Society for Performing Arts, the Springer Opera Hose and New Horizon Community Theatre. He said that this is the first show that he has directed. He serves in a community volunteer role with the club. Samantha Cotton, a CMS teacher, is the club sponsor, and the school administration said they are excited about the new club.

“I am excited for what the drama club offers our students at CMS,” Principal Amy Thornton said. “We are looking forward to an exciting year ahead.”

As an active participant in local theater, Brawner said that he felt it was important to be part of the program, and he hopes other members of the community will support CMS’s drama club as well.

“Once I realized that they needed help with this program, I decided to jump in and volunteer for that,” Brawner said.

In addition to students on stage and behind the scenes, a student is also currently working on some of the advertising elements for the CMS production of “Stargirl.”

“It feels really cool [to create the designs] because I like this, and we didn’t really have a drama club when I was here in sixth and seventh grade, so this is new for me,” said Taylor Bowden, the 13-year-old student who is designing a poster and t-shirts for the show. “I hope that we can have more shows and get known across the school because I don’t think many kids know that we have a drama club.”

The CMS Drama Club’s production of “Stargirl” is scheduled to be performed on Feb. 7 and 9. More details on the show will be available closer to the time of the production.